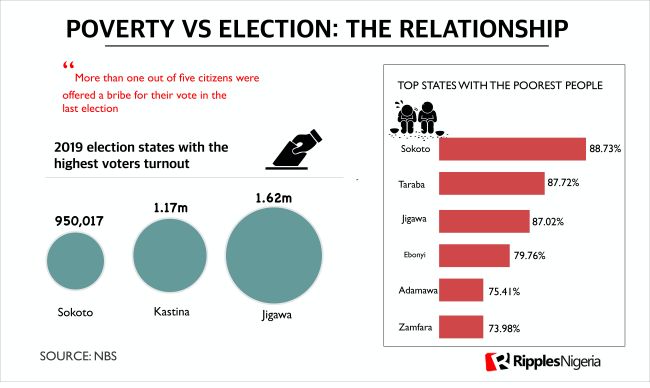 Given past trends, the run up to who will replace him in 2023 is set to have a recurrent theme of cash, corruption and campaign.

The yet-to-be signed Electoral Act Amendment Bill raised the spending limit for the presidential election from N1 billion to N15 billion, a 1,400 per cent increase. The campaign expenditure limit for the governorship election was also raised by 2,400 per cent, from N200 million to N5 billion.

For a country with over 88 million living below $1(N416) per day and under poverty line, one can clearly picture what is set to take place in the coming months to the election day.

President Buhari won the election in 2019 with 15,191,847 votes (15.19 million). If the candidate who succeeds him spends the N15 billion agreed upon in the new electoral bill to win 15 million votes, it means he would have spent N1,000 per person, which is significantly more than the daily income of over 88 million Nigerians.

Region with the highest poverty and connection to election

Corruption in Nigeria dates far before independence and the evil still exists till now. One major weapon in achieving this aim is poverty. In search of what to eat, many Nigerians are willing to do anything, a gap which politicians have weaponized to get what they want.

Looking at the numbers, it is not difficult to see the nexus between poverty and corruption. In the National social register, 35.44 million poor Nigerians are expected to get N5,000 monthly to survive. Out of this number, 17.3 million are male while 18 million are female, as at May 31, 2021.

Using the recent survey by the National Bureau of Statistics (NBS) and the United Nations Office on Drugs and Crime (UNODC), there is a significant increase in the incidence of bribery and corruption among northern states.

According to the report titled, Corruption In Nigeria: Patterns and trends, the average number of persons willing to pay bribe and receive grew faster in North-West and North Central zones by 5.2% to 6.6% in 2019(the last election year).

The report also showed that in the last general election In May/June 2019, 21% of the adult population of Nigeria reported that they were personally offered money or a favour in exchange for their vote.

More precisely, 17 per cent of survey respondents were personally offered money while 4 per cent were offered a favour in exchange for their vote.

A further 5 per cent reported that they were not personally offered a bribe in exchange for their vote, whereas another member of their household was offered a bribe.

Making the most of the Statistics

No doubt, vote buying and poverty have a relationship and it will be important that those caught in the act are punished and shamed publicly.

However, civil organizations, including government, led by the Independent National Electoral Commission (INEC), must realize that a lot more work needs to be done in the area of sensitizing the general public ahead of the election day.

RipplesMetrics: Nigerian economy attracts $35bn foreign investment in 3 years but 10 states get nothing