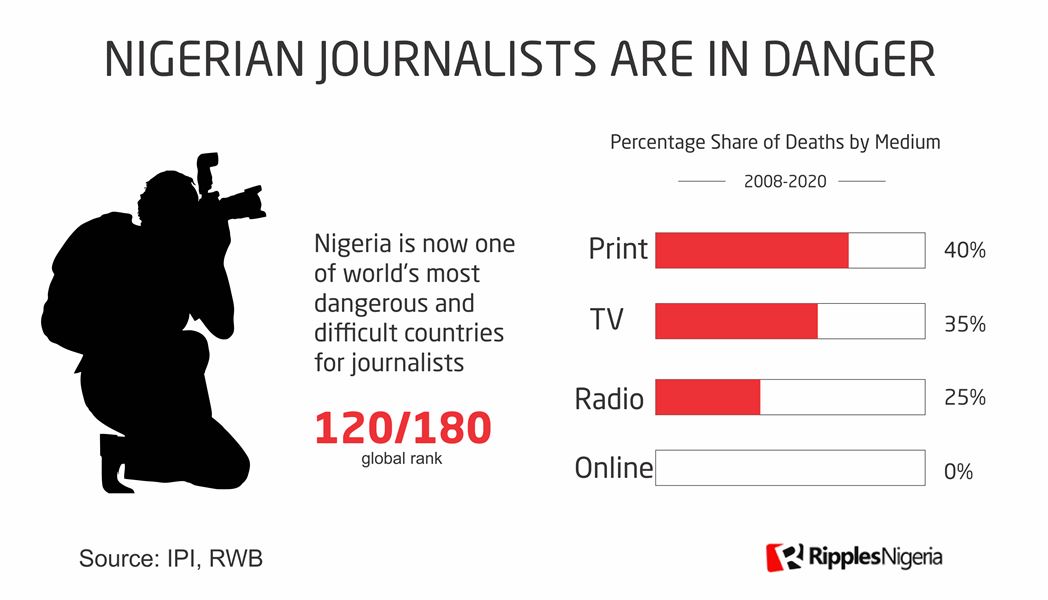 Monday, May 3, was United Nation’s World Press Freedom Day but for a Nigerian journalist, it is a chilling reminder of threats they face practicing the profession they love.

In the last 13 years (154 months), almost no year has gone by without a Nigerian journalist reported to have been killed.

According to data sourced from the International Press Institute, between 2008 and 2020, Nigeria accounted for almost two percent of the total number of journalists killed worldwide while carrying out their job.

The 71-year-old global organization, dedicated to the promotion and protection of press freedom and the improvement of journalism practices, disclosed that at least 1,228 journalists were killed during that period, and out of this number 20 were Nigerians.

The 20 Nigerian journalists murdered include those working for print, television and radio.

Ripples Nigeria analysis of IPI’s data showed 2012 was the most deadly year for Nigerian journalists, as five deaths were recorded and this represents 3.75 percent of 133 journalists killings registered worldwide.

The Nigerian journalists killed include Eneche Akogwu, a channels TV employee who was shot by unidentified gunmen.

Augustine Sindyi, a photographer for Standard newspaper was also killed by a bomb explosion while walking home from church.

Nathan Dabak, the deputy editor of the Protestant fortnightly Light Bearer and his reporter Sunday Gyang Bwede, were hacked to death.

In 2010 also, Edo Sule Ugbagwu, a court reporter for The Nation, was reported to have been gunned down in his Lagos home.

2017 was the third deadliest in which Famous Giabaro, Okechuku Onubogu, and Lawrence Okojie, were reported as victims.

Famous Giabaro, an editor with Bayelsa State owned radio, Glory F.M 97.1. was gunned down by unknown assailants in his house.

Lawrence Okojie, a reporter with the Nigerian Television Authority was also killed on his way home in Edo state.

Last year, the death of Alex Ogbu, and Maxwell Nishan made it the fourth deadliest in the last 13 years for journalists.

Alex Ogbu, a reporter and editor with the local independent outlet Regent Africa Times, died from head injuries sustained covering a protest while Maxwell Nishan a journalist for Fombina FM, a unit of the Federal Radio Corporation of Nigeria was found dead after he was picked up by unknown gunmen.

Other years recorded one death each.

In 2008, Ephraim Audu was part of the 66 journalists death recorded globally in the year.

Audu, a state radio journalist, was shot outside his home in Lafia. In 2009, Bayo Ohu, of the Guardian Newspaper was also shot dead in his home.

In 2011, Zakariyya Isa, a reporter and cameraman with Nigeria Television Authority (NTA), was shot dead in front of his residence.

Ikechukwu Udendu, an editor of Anambra News was killed in 2013 by unknown gunmen.

While Ustaz Yunus, the General Manager of Kaduna-based weekly newspaper, New Democrat was also killed in his home in 2014.

In the year 2015, 2016, 2018 no death was recorded. However, after a three-year gap in 2019, Precious Owolabi, a member of the National Youth Service Corp was shot while covering protests in Abuja.

Ripples Nigeria check shows the percentage of arrest or prosecution made over the deaths of Journalists has been almost zero.

For instance, in the case of Lawrence Okojie police said they had apprehended the murderer but no name was given and nothing has been heard about the incident.

In the case of Bayo Ohu, on March 15, 2010, the police paraded three suspects who they claimed were his killers. The suspects were Dada Yemi Adesanya (23 years old), Ganiu Suleman (28 years) and Idris Balogun (26 years).

However, the police insisted the killing of the late Mr. Ohu was a case of armed robbery and not assassination as reported by the media.

Nigeria in the eyes of the world

According to latest 2021 Reporters Without Borders, world press freedom ranking, Nigeria has one of the worst place to practice journalism in Africa.

Nigeria ranks at 120 out of 180 countries in the world, meaning the country is considered as one of the most violent for journalists.

Eritrea at 180 is the worst in the world and Djibouti takes the second spot at 176 worst countries to practice as a journalist.

“Nigeria is now one of West Africa’s most dangerous and difficult countries for journalists, who are often spied on, attacked, arbitrarily arrested or even killed,” the report noted.

Other salient issues raised in the report are that:

“The campaign for the elections in which President Muhammadu Buhari obtained another term in February 2019 was marked by an unprecedented level of disinformation, especially on social media.

“The all-powerful regional governors are often the media’s most determined persecutors and act with complete impunity. In 2018, one governor had part of the premises of a radio station razed after a series of reports criticising his handling of local affairs.

“Online freedom is restricted by a 2015 cyber-crime law that is widely used to arrest and prosecute journalists and bloggers in an arbitrary manner.

“Three journalists have been shot dead while covering Islamic Movement in Nigeria protests since July 2019 without any proper investigation to identify those responsible.

“The police are often the direct beneficiaries of impunity and were blamed for the death of a young trainee journalist after arresting him in October 2020.

“The major street protests in 2020 were accompanied by violence against the media. Several news organisations were torched and many reporters were attacked.

“With more than 100 independent newspapers, Africa’s most populous nation enjoys real media pluralism but covering stories involving politics, terrorism, and financial embezzlement by the powerful or conflicts between communities are very problematic.

And, that “This was seen yet again in 2020, when an investigative reporter was threatened and several of his sources died or were killed after he investigated massacres in the northern state of Kaduna.”

RipplesMetrics: Number of IDPs in Nigeria higher than population of 17 individual African countries