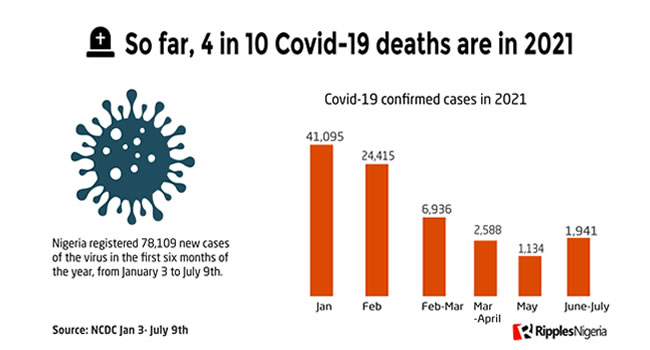 Many Nigerians have become complacent against the dreaded Covid-19 disease in recent months, particularly in public places, but data reveal there is need to remain very vigilant.

Data obtained from the Nigeria Centre for Disease Control, and analysed by Ripples Nigeria, reveal that in the last six months, 811 Nigerians have died as a result of the virus out of the 78,109 confirmed cases during the period.

While the number of confirmed coronavirus cases increased from 90,147 to 168,256, during the period under review, data also showed that 164,415 cases have been discharged and that there are about 1,719 cases as at Friday, July 9.

Despite the increase in the number of cases, especially deaths, Nigerians have continued to show complete disregard to Federal Government’s guidelines of compulsory wearing of face masks in public places.

During the relaxed lockdown in 2020, Nigerian government made wearing face masks compulsory, insisting that any person caught without a face mask in public will be prosecuted.

But, to date, Nigerians have continued to flout the rule more brazenly. From the places of worship to restaurants, bars, schools, markets, social gatherings, commercial buses, and even in the state-owned BRT buses, the usual practice of wearing face masks or complying with the social distancing rule has virtually disappeared.

A review of monthly cases (January-July)

A monthly assessment of cases for 33 states and the Federal Capital Territory (FCT) indicates a decreasing trend but not one to be celebrated.

In February ending 28, another 24,415 confirmed new cases were reported as total number of cases increased to 155,657.

From February 28 to March 28, NCDC data show that another 6,936 Nigerians tested positive to the virus. These new numbers increased the total case to 162,593.

In June through July 9, about 1,941 Nigerians were infected with the virus as the total number of cases reached 168,256.

As at July 9, the top 10 States with highest number of confirmed cases were Lagos, Abuja, Kaduna, Plateau, and Rivers. Others are Oyo, Edo , Ogun, Kano and Ondo.

Abuja followed with 7,823 new cases during the period under review and 63 deaths.

Which states are the most vulnerable?

With many Nigerians removing their face masks, it is critical to identify which states are most susceptible and where death is most likely to occur should there be a major outbreak which we all hope not.

According to data sourced from Surgo Foundation on Nigeria’s Covid-19 Community Vulnerability Index (CCVI), residents of five States of the 36 states have very high probability of losing their lives to the virus when it is contracted.

Five of these states are Yobe, Zamfara, Jigawa, Gombe, Taraba and Sokoto. These states are considered vulnerable because residents do not have equitable access to health care, affordable housing, transportation, childcare, or safe and secure employment.

Summary of Surgo Foundation data about Nigeria shows that most cases in Nigeria were in less vulnerable states with higher population density: Lagos, Abuja (Federal Capital Territory), and Kano.

According to NCDC numbers as at July 9, a total of 2,331,734 Nigerians out of over 200 million population had been tested. This represents one of the lowest ratios in the world.

What is happening with vaccinations?

So far, only less than 1 percent of Nigerians have so far received their first dose of COVID-19 vaccine.

According to Faisal Shuaib, the Executive Director National Primary Health Care Development Agency (NPHCDA), as at June 15, 2021 a total number of 1,978,808 targeted eligible Nigerians had partaken in vaccination against the Virus.

This represents 1.9 doses of vaccines per 100 people.

As at on Friday, Nigeria’s 168,110 confirmed cases rank 12 in Africa behind South Africa, Egypt, Tunisia, Morroco, Ethopia, Algeria, among others.

Also, Nigerian death rates at 1.1 are one of the lowest among other African countries. Tunisia ranks highest with a death rate of 136.1, followed by South Africa 109.1. Nigeria sits at 8th place from the bottom.

Why Nigerians should be worried

On Thursday, NCDC announced that Nigeria had recorded the first case of the most transferable variant of the Virus which has increased cases and deaths.

The Delta variant has also been linked to a surge in cases in countries where it is the dominant strain in circulation.

What is the government saying about the new variant?

The Director General of NCDC, Dr. Chikwe Ihekweazu, warned of impending risk if the country lowers its guard.

According to him, “Although we have seen a low number of COVID-19 cases in Nigeria in the last eight weeks, it is incredibly important that we do not forget to be careful. The surge in cases in countries across the world and Africa is an important reminder of the risk we face.

“Please protect yourselves and the people you love by adhering to the known public health and social measures, getting vaccinated if you are eligible and getting tested if you have symptoms”.

“The recommended control measures to limit the spread of the Delta variant continue to be testing, following the existing public health guidance and abiding by the current travel and public restrictions,” he added.

Related Topics:#featuredcoronavirusCOVID-19Covid-19 disease
Up Next

RipplesMetrics: As economy bites, Nigerians withdrawing from pension savings up by 29.1%