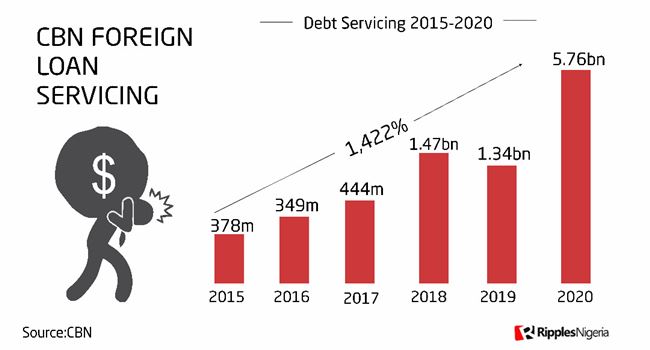 The Central bank of Nigeria (CBN) has revealed, that Nigeria paid off $5.76 billion as external debt service from January to December in 2020, this is the biggest amount payment recorded in a year in Nigeria’s debt history.

According to data obtained from CBN, the sum spent in servicing external debt in 2020 represents a 329.5 percent rise compared to $1.34 billion the cumulative total debt service payment recorded in 2019.

Breakdown of 2020 figure shows the biggest tranche of payment was made in February, when $4.43 billion was paid, while the lowest amount in March, $124 million to external debtors which include the World bank, World Bank, African Development Bank, Exim Bank of China, Exim Bank of India among others.

In 2005, Nigeria led by the present head of World Trade Organisation, Ngozi Okonjo-Iweala, who was at that time the Minister for finance vigorously campaigned for debt pardon. This was granted by the creditors and $18 billion Nigeria’s debt was written off.

While the outlook for Nigeria’s revenue in 2021 looks promising as oil prices continue to rally, the burden of subsidy, mounting debt which currently stands at over $32 trillion according to Debt Management Office, and depleting external reserves, only time will tell how much more Nigeria will finance before it begins to ask for relief.

Nevertheless, right now, Nigeria has an obligation and the cycle of debt servicing against the socio-economic wellbeing of the citizens will continue in 2021.