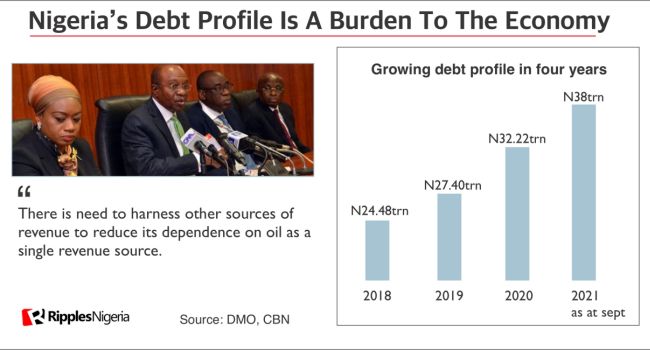 Debt servicing has continued to constitute a major setback for the Nigerian economy as the Central Bank of Nigeria (CBN) has, once again, been forced to withdraw from the Federal government account to settle debt obligations.

The international payment data by the CBN showed that from January and October 2021 a whopping $1.9 billion was paid out to the World Bank, International Monetary Fund, and china for debt service.

The payment was made only on behalf of the federal government and does not include state government debts.

Analysis of data showed that in the first three months of 2021, $1.3 billion was spent to service debts. The amount dropped to $298.9 in the next three months ending June.

From July to October, CBN further disclosed that a total of $606 million was spent to service debts.

The Monetary Policy Committee members of the CBN continued to express concerns over increasing debt and its vulnerability to the nation’s economic growth.

At the last meeting held on Monday, 24th and Tuesday 25th January, 2022, the members cautioned on the rising government debt profile and the concentration of the funding sources and its implications for fiscal sustainability.

The MPC also urged the Government on the need to harness other sources of revenue to reduce its dependence on oil as a single revenue source.

In addition, it reiterated the need for government to seek alternative, more viable, and efficient infrastructure financing sources, in order to ease its expenditure burden rather than borrowing.

Related Topics:#featuredCBNChinaIMFRipplesMetricsWorld Bank
Up Next

RipplesMetrics: Data show why Nigerian league is unattractive, as it takes 97 minutes to cheer, goal!