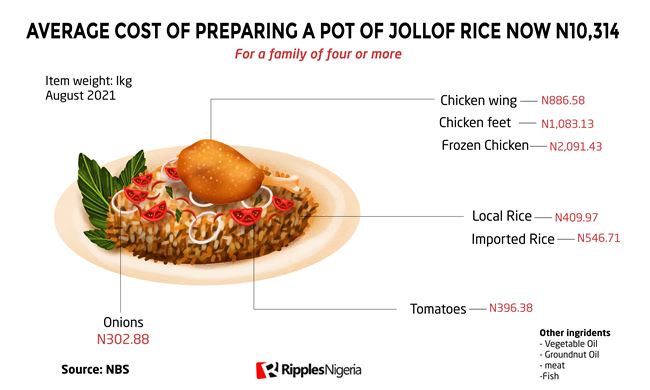 The poor and vulnerable Nigerians have continued to pay the price for soaring food prices with the cost of preparing a pot of jollof rice, one of the country’s most popular delicacies, rising to N10,314 in August.

The figure was the outcome of Ripples Nigeria analysis of the items needed to prepare the meal featured in the National Bureau of Statistics (NBS) food price watch for August released on Tuesday.

These ingredients required to prepare a pot of jollof rice include rice, tomatoes and tomato paste, onions, cooking oil, meat, chicken, and beef.

According to NBS, the aforementioned items had increased by an average of 30 percent in the last four years.

Similarly, one kilogramme of tomato, another important ingredient recorded a significant increase to N396.38 from N247.55 in January 2017.

RipplesMetrics… Nigeria at 61: Where we were and where we are now in numbers