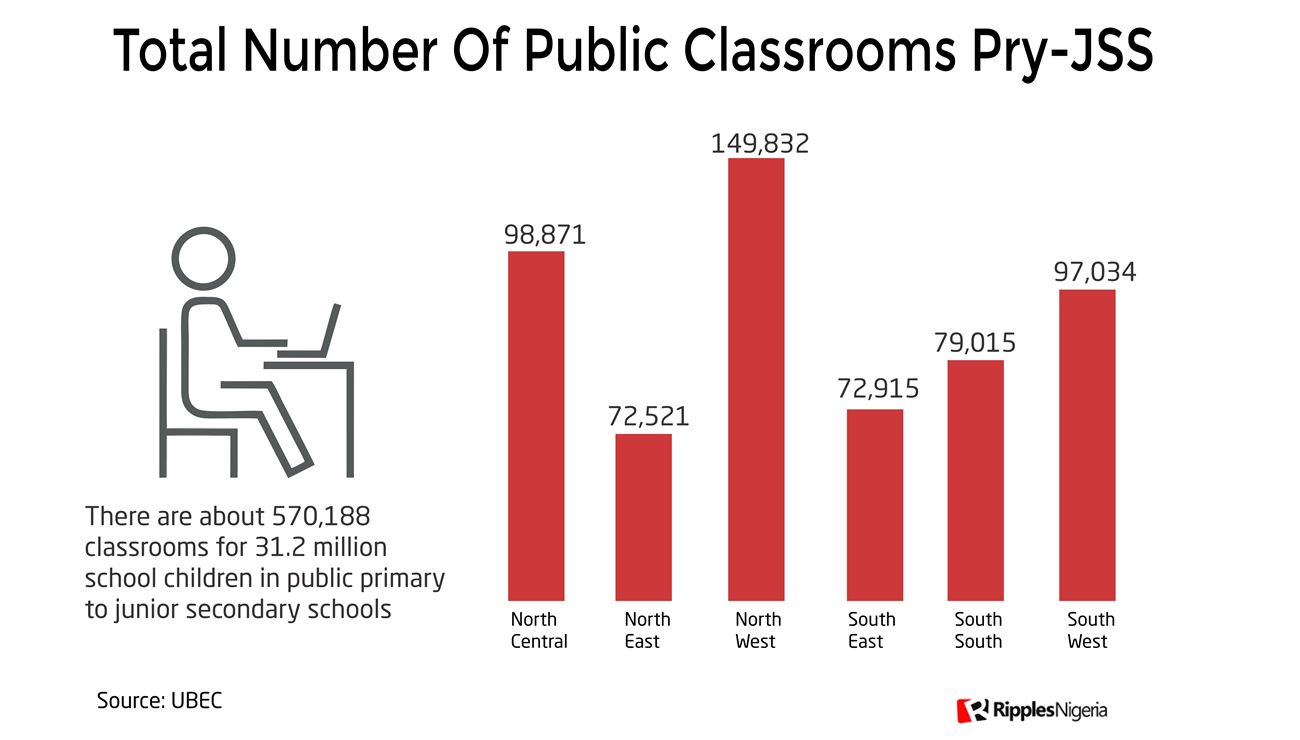 Thursday, May 27 was marked as World Children’s Day but concerns continue to mount over the educational future of children born into the Nigerian space.

Every year, over 31 million primary and junior secondary school students in Nigeria begin a new school year, and about 14 million of them, are forced to learn in unsuitable settings.

This is according to the latest data obtained from the Universal Basic Education Commission website.

According to the data titled Compendium of Public School’s Basic Education Profile Indicators 2018, UBEC noted that there were about 570,188 classrooms for 31.2 million school children enrolled in pre-primary to junior secondary education in the country, of which only 300,892 of the classrooms are considered good for learning.

What this means is that at least 5 out of every 10 classrooms in Nigeria where students are enrolled are in poor condition.

Breakdown shows there are 37,754 bad classrooms at the Early Childhood Care and Development Education (ECCDE) level and 197,938 in primary schools.

Also, 33,604 Junior Secondary School classrooms are said to be in bad condition.

By region, UBEC data show the north east region has the highest number of classrooms in bad conditions.

Among other things, the learner to classroom ratio suggests another difficulty children face in school.

UBEC data show that proportionately, learner to classroom ratio in Nigeria averaged at 54.3 per cent, well beyond United Nations Educational, Scientific and Cultural Organization recommended standard (25) and National Policy on Education (40) for number of students in a classroom.

The number is even remarkable at 99 students per a good class room.

When student demographics are taken into account, UBEC data suggest that there are 84 pre-primary children to a decent classroom. While decent classrooms in primary and junior secondary schools have class occupancy of 107 persons each class.

Dr. Soji Oni in his book titled challenges and prospects in African education systems posited that overcrowded classroom conditions not only make it difficult for students to concentrate on their lessons, but inevitably limit the amount of time teachers can spend on innovative teaching methods.

The innovative methods, he said, include cooperative learning and group work or on teaching anything beyond the bare minimum required by the curriculum.

He also added that teachers in congested classrooms are generally over-stretched, more likely to suffer from burnout, or have a more strained relationship with their pupils.

RipplesMetrics: Governors face tough decisions, as only 3 Nigerian states can generate up to 50% of their running costs

RipplesMetrics: Naira falls by 324% since 1999. What does the future hold?