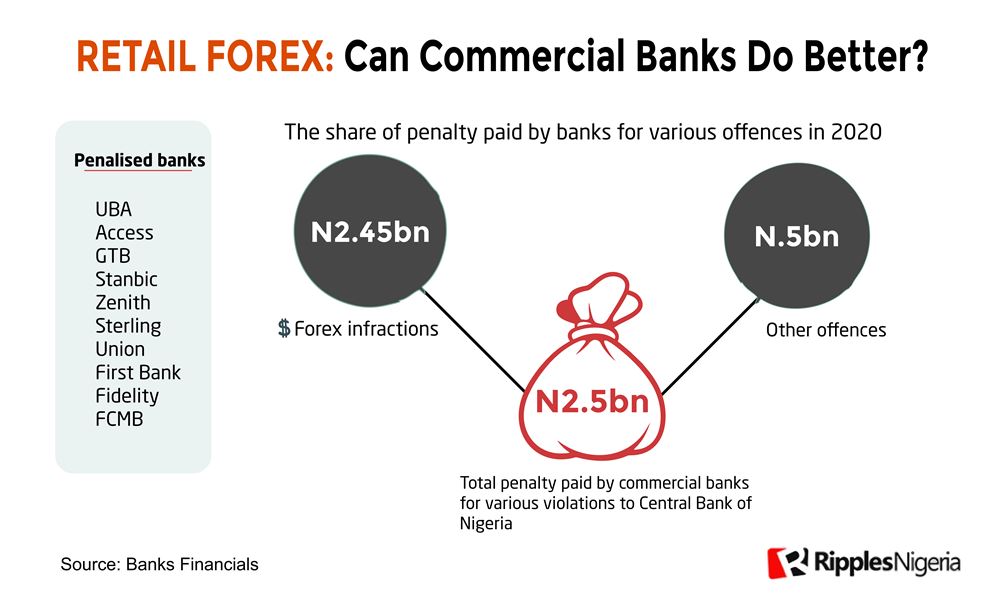 The move by the Central Bank of Nigeria (CBN) to stop the sale of dollars to Bureau De Change(BDC) operators made headlines in recent weeks.

The CBN governor, Godwin Emefiele, had described the decision as necessary to help stabilize the Naira.

Following the conclusion of the 137th Monetary Policy Committee (MOC) meeting on Tuesday, July 27, Emefiele had slammed the activities of BDC operators, accusing them of being agents of graft and corruption.

“We are concerned that BDCs have allowed themselves to be used for graft,” Emefiele said after the MPC meeting.

Though CBN’s decision has been hailed, and commercial banks have equally assured compliance, however analysis by Ripples Nigeria show banks are almost as culpable as BDCs on forex violations.

According to figures obtained from financials of 10 banks from 2019-2020, a cumulative sum of N2.55 billion has been paid as forex related penalties.

In 2019, FCMB, Fidelity, GTB, and Union were culpable of forex infractions to a cumulative sum of N100 million.

In fact, in 2018, the Standard Chartered, Stanbic IBTC, Citibank, and the now defunt Diamond bank were made to pay a total sum of N5.9b as penalty for forgeries in foreign exchange transactions between 2007 and 2015.

Another sanction was meted out in 2017 to about 15 commercial banks for forex related offences.

Four banks were found guilty of currency violations in 2019, with FCMB receiving the largest penalty of N72 million.

FCMB was penalized for failing to verify that customers completed the required e-form M for the importation of goods. The customer is permitted to transfer a total cash deposit of $10,000.

GTB, on its part, was fined N24 million for allowing BDC operate without Bank Verification Number while Fidelity paid N2 million for non-repatriation of export proceeds and Forex Examination Report.

In 2020, UBA topped the list of fines paid for FX violations. It paid N623 million to the CBN in relation to the operation of clients’ domiciliary accounts.

This was followed by Access Bank, which paid N451 million in fines for obtaining FX from the Nigerian FX market for the importation of textiles, as well as violating the CBN FOREX manual and the TED Act, among other things.

Guaranty Trust Bank (GTBank) was reported to have paid N267 million for customer’s use of FX sourced from official market for textile importation and CBN Spot check examination on domiciliary account balances of customers.

Stanbic IBTC paid N259.2 million in fines in respect of an alleged contravention of the provision of memorandum 25(5)(b) of the CBN’s FX Manual in processing FX transfers and foreign exchange rules on import of textiles.

The records also showed that Sterling Bank was fined N30 million for non-processing of e-Form M for importation of goods.

Since the enforcement of CBN decision, Chief Executive Officers (CEOs) of banks have responded by creating teller stations and promising Nigerians that they would be able to take over the services supplied by 5,689 BDCs.

One of the CEOs, Herbert Wigwe of Access Bank, told journalists that commercial banks have the capacity to meet the forex demands.

“We have the spread, infrastructure and personnel to service the retail end of the forex market in line with the directives of the Central Bank of Nigeria (CBN),” he assured.

BDCs retail FX services which will be taken over by banks include buying from the public and also selling to end-users for allowable transactions namely PTA, BTA, and payment of medical and school fees.

As at August 6, checks by Ripples Nigeria showed banks were selling dollars to Nigerians at the rate of N412/$.

RipplesMetrics: Is Buhari dead? What is love? Here are top questions Nigerians are asking Google in the last five years