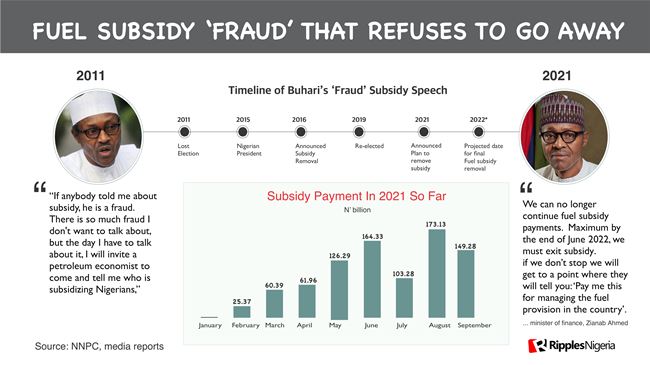 President Muhammadu Buhari, as a presidential candidate strongly opposed former President Goodluck Jonathan’s plan to remove fuel subsidy, had declared in 2011 that the much-touted policy was a fraud.

In an interview where he was seen spotting white, Buhari had intensely argued that there was no fuel subsidy, insisting that the economic policy had provided an avenue for the then government to oil the wheel of corruption.

He also promised to stop the subsidy and even reduce the pump price of petrol if elected.

“Who is subsidizing who?” he queried while explaining why the talk on subsidy payment is a fraud and there was no subsidy.

“If anybody told me about subsidy, he is a fraud. There is so much fraud I don’t want to talk about, but the day I have to talk about it, I will invite a petroleum economist to come and tell me who is subsidizing Nigerians,” he fumed.

Buhari further argued how during his time as a petroleum minister, from 1976-78, there was no mention of subsidy payment.

“What I understand that Nigeria should charge Nigerians is the cost of one barrel at the wellhead and then the cost of transportation to the refinery, the cost of refining it and its cost at the pump.”

Based on his economics, he concluded: “If anybody says he is subsidizing anything, he is a fraud.”

Fast forward to 2021, and after six years under Buhari’s watch, subsidy argument remains but this time under a different baptismal name.

Data obtained by Ripples Nigeria from the Nigerian National Petroleum Corporation(NNPC) show that the administration of President Buhari has spent almost N4 trillion on fuel subsidy, highest amount coming in the first nine months of 2021.

According to NNPC data, N653.51 billion was pledged to fuel subsidy in 2015, when Buhari took office.

Following from his campaign promise, Buhari had assured Nigerians there would no longer be subsidy payment and that 2015 would be the last.

The former dictator also went ahead to appoint himself as Petroleum Minister, promising a clean-up of the system.

Indeed, in the first eight months of 2016, a check on Petroleum Products Pricing Regulatory Agency and NNPC showed no record of fuel subsidy of payment.

However, everything reversed from September to December, as the item gulped N24 billion.

In 2019, following his re-election, President Buhari retained his portfolio as Petroleum Minister, again removing subsidy and highlighting transparency as reason.

In 2019, the payment on subsidy dropped from the previous year to N551.22 billion, again with a promise that it would be the last.

In fact, opening the year 2020, Mele Kyari, the NNPC group managing director, declared, “It is zero subsidies forever” in a series of interviews and webinar.

This was buttressed further by Minister of State for Petroleum Resources, Chief Timipre Sylva, noting the industry has been deregulated.

He said in 2020, “what this means is government will no longer set price for the product and this will save the country trillions.”

In the first five months of 2020, just as in 2016 there was no record or announcement of subsidy payment.

However, in June it changed as NNPC declared it incurred N5.35 billion as under-recovery in the month.

Ripples Nigeria’s further check on the NNPC unaudited financial statement revealed that N102 billion was spent on subsidy in 2020.

Part of the report reads: “Crude supplies for domestic use represents the cost of crude purchased by the Corporation from the Federation at the prevailing international market price for local market consumption.

“When the crude is converted to refined product either through the refineries or refineries DSDP arrangement, the Premium Motor Spirit (PSS) is usually sold to the local market at a price below the prevailing market price leading to under recovery of cost (fuel subsidy) which amounts to N102 billion in 2020”

The fuel subsidy expenses continued in 2020, and in 2021 is turning out to be the most expensive.

Figures from NNPC monthly FAAC reports show that from January to September 2021, N864.07bn have gone into subsidy payment.

NNPC did not incur petrol subsidy cost in January, but spent N25.37bn on subsidising the product in February.

From the data, it can be established that talks of fuel subsidy removal are always intense pre-election and immediately after the election.

The payment of the subsidy is either lowered or stopped with assurance.

As noted in 2015, President Buhari rode on the promises of cleaning up Nigerian oil sector to win trust, then went ahead to appoint himself as petroleum Minister. The following year, witnessed no payment on fuel subsidy for 8 months.

However, it returned the following year and, in fact, increased further in 2018(pre-election year).

As had become a pattern, talks of subsidy removal intensified a year later, with a promise this time it would be removed completely. That did not happen subsidy payment continued in 2019.

Following his re-election, the campaign on deregulation began, with promise that there would be no longer subsidy, the same pattern from 2016.

For the first five months of 2020, NNPC declared no subsidy payment, exactly as in 2016.

Fast forward to 2021, and the drum of subsidy removal is once again being beaten in the run-up to the election, with the government vowing again that this time it would be the last.

Government’s hope hinge on the ongoing rehabilitation of the Port Harcourt refinery and the possibility of Dangote refinery coming on stream.

However, time will tell if, indeed, the ‘fraud’ subsidy will truly become a past.

ICYMI… RipplesMetrics: Despite interventions, Nigeria is still largest importer of rice in Africa