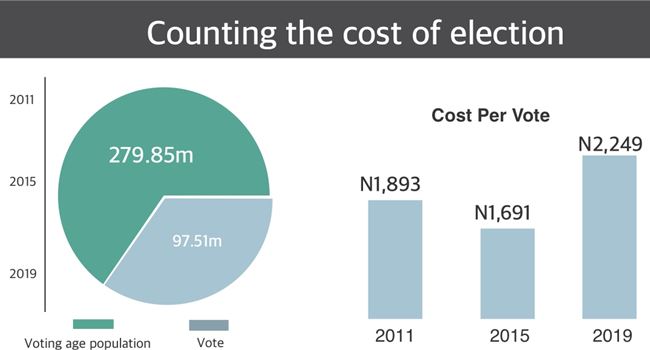 Nigeria is not just one of the costliest countries to hold elections in, but it is also one of the most wasteful.

Every four years, Nigerians go to the polls to elect representatives into various political offices.

In carrying out this exercise, the Independent National Electoral Commission (INEC) puts different plans in place to ensure the success of the elections in line with the Constitution and Electoral Acts.

Amongst other things, INEC prepares its budget and submits it to the National Assembly for consideration and approval

The law compels the electoral commission to use the voter register, that is, the number of people who have registered for an election, as a basis for election planning, instead of the figures of those who merely collected their Permanent Voters Card (PVC).

What this means is that if 1 million Nigerians registered to vote, and only 200,000 actually got their PVC, INEC planning guide will be the one million registered voters and this has come as a huge cost.

The last three national elections of 2011, 2015 and 2019 cost the nation some whooping N444.5 billion according to Ripples Nigeria analysis.

In 2011, according to INEC, it recorded 73.5 million registered voters. The election budget for that year was then based on an average cost of N1,893 or $9 per voter. This amounted to N139 billion.

The highest number of registered voters preceded the last general elections in 2019.

The electoral commission recorded 84 million registered voters and budgeted N2,249 or $6.24 per voter. This cost the country N189.2 billion.

However, when the figures are compared with the number of people who actually turned out to vote in the last three general elections, it showed that over N255 billion had been wasted.

As earlier noted in 2011, the number of registered voters for the general election was 73.5 million as INEC budgeted N139.1 billion for the election.

Read also: RipplesMetrics: Nigeria’s 2022 budget serviced by debts but filled with ‘invisibles’ that would not be tracked

For the 2019 general polls, 28.61 million Nigerians participated in the election out of 84 million voters. The decision of the 55 million voters to stay at home came at a cost of N124bn to the country.

To put it context, Director of Yiaga Africa, Samson Itodo in a report noted that specifically for 2019 elections, INEC printed over 427.5 million ballot papers (of currency quality) for 80 million registered voters.

“Less than 30 million ballots were used in the elections, because only 35 per cent of registered voters showed up to vote. Billions of Naira went to waste due to a large number of unused ballots papers,” he said.

According to a Budget document for 2022, the federal government has earmarked N100 billion for 2023 elections, an amount which Prof Mahmood Yakubu, INEC Chairman, said is inadequate.

Yakubu’s argument is that if N189bn was appropriated for in the 2019 general elections, there is no way N100 billion for 2023 would be sufficient.

“We would need more money because we’ve expanded our polling units and we are introducing new technology for elections among many other new innovations. The number of registered voters will increase beyond the 84 million for the 2019 general elections,” he said.

ICYMI…RipplesMetrics: The numbers ahead of Anambra State election amid security concerns