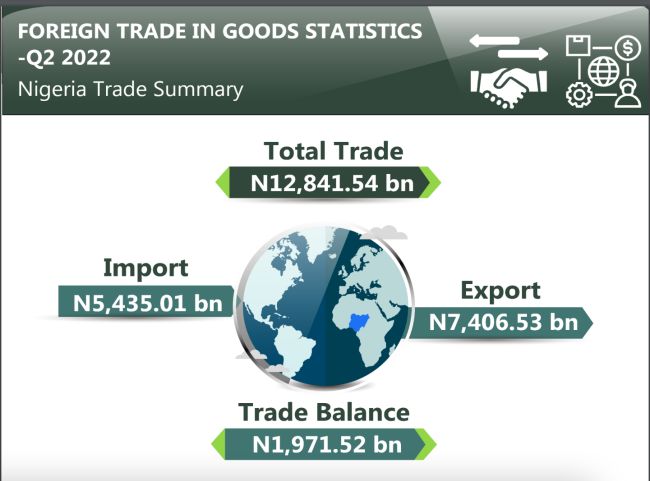 The National Bureau of Statistics (NBS) recently released the second quarter of 2022 foreign trade report which shows that Nigeria recorded N12.8 trillion worth of trading activities.

According to the NBS breakdown, Nigeria sold N7.4 trillion worth of goods and imported N5.4 trillion in three months.

Here are some of the key highlights from the report.

Lets kick off with the good news which comes with a question mark.

Nigeria last sold more than it bought for two consecutive quarters in 2019, Q1 and Q2.

While the Central Bank of Nigeria would like to claim that positive trade is a result of sustained intervention programmes in various sectors of the economy, this is not the case.

A closer examination of the data reveals that higher exports were caused by forex scarcity, Naira depreciation, and higher oil prices.

Foreign goods, for example, present a higher figure when sold and converted to Naira value. Similarly, an increase in oil prices influences the value of crude sold in Naira.

This is due to Nigeria losing its position as a major African oil exporter to Algeria twice during the period and failing to meet its OPEC-agreed production quota.

Crude oil export is closely followed by natural gas, which brought in N735.59 billion to the economy, accounting for 9.93 per cent of total exports during the period under review.

The above figures again show that Nigeria is still largely an oil-dependent economy, and CBN’s strong diversification programme is yet to yield results.

According to NBS, Nigeria spent N984.7 billion of its revenue on importing petrol, and this accounted for 17.56 percent of the total import.

Following closely are Gas oil and Durum wheat contributed 6.58, and 4.46, respectively, in the second quarter.

China missing from buyers of Nigerian products, prefers to sell

The others are France, Italy, Sweden, Canada, and Ivory Coast.

However, China tops the table of countries exporting to Nigeria with the quarter under review.

The increase in imports of Agriculture products comes despite various intervention programmes such as the Anchor borrowers’ programme.

In its last monetary policy meeting, CBN noted that Between May and June 2022, under the Anchor Borrowers’ Programme (ABP), the Bank released the sum of N3.62 billion as disbursements to 12 projects for the cultivation of rice, wheat, and maize, bringing the cumulative disbursement under the Programme to N1.01 trillion, to over 4.21 million smallholder farmers cultivating 21 commodities across the country.

The Bank also stated that it disbursed N3.72 billion to finance three (3) large-scale agricultural projects under the Commercial Agriculture Credit Scheme (CACS).
“These disbursements brought the cumulative disbursements under this Scheme to N744.32 billion for 678 projects in agro-production and agro-processing,” it said.

RipplesMetrics: Here is how much an average Nigerian worker lost in wages in one year; thanks to inflation