RipplesMetrics: For an average Nigerian, it’ll take 69 years to earn a Senator’s one month salary in 2021 | Ripples Nigeria 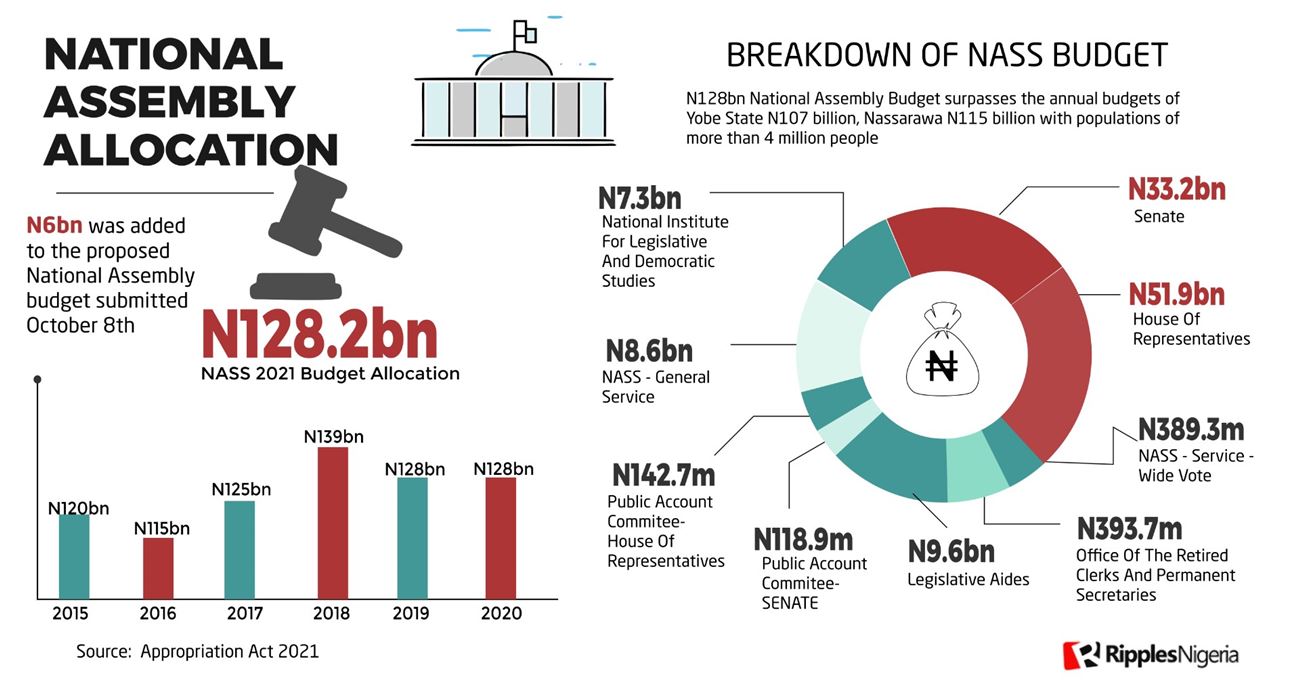 To say Nigeria’s National Assembly is expensive is no news, but the disparity to the harsh reality of over 200 million Nigerians is quite baffling.

In the last 10 years, maintaining 109 Senators and 360 House of Representatives members has cost Nigerian tax payers over N1.33 trillion as budgetary allocations to the two chambers, as well as other agencies of the federal legislature.

Noteworthy is the fact that the said sum does not include the non-regular allowances occasionally given to the Senators and the members of the House of Representatives.

Specifically, in 2021, out of the total sum of N128 billion allocated to the National Assembly and its agencies, the Senate and House representative will get N85.2 billion; N33.25 billion for the senate and N51.9 billion for representatives.

RipplesMetrics calculation shows that by the end of 2021, each Senator is expected to have received N305 million, that is, about N25.4 million monthly and members of the house of representatives N144.4 million which is N12.04 million monthly.

When this figure is put side by side with N30, 000 minimum wage of an average Nigerian, if he or she has to save the whole, it will take 69 years to accumulate the monthly expected pay for a Senator in 2021 and another 34 years for the monthly pay of a House of Representatives member; while at the same time find a way to pay the new electricity tariff, feed and attend to life’s basic needs.

More interesting is that while Ministries, Departments and Agencies (MDAs) appear before the standing committees of both chambers to defend their allocations, the National Assembly does not defend its budgetary allocations. The constitution is silent on this.

Infact, National Assembly allocation is in a special category, statutory allocation, which mandates the federal government, after receiving revenues, to make the legislators’ funds immediately available before other considerations.

For years, there have been calls for a cut in funds allocated to the National Assembly given Nigeria’s dwindling public fund, rising debts and deficits.

Last year, Senator Rochas Okorocha advocated for the number of lawmakers in both houses to be reduced to save cost.
According to him, Nigeria should just have one Senator and three House of Representatives members from each state, noting the “reduction in the number of representation from the states would help cut cost and ensure effective representation.”

Critics have often drawn comparisons with United States of America, from which Nigeria models her democracy, where the country has only 100 Senators for 50 states against Nigeria’s 109 Senators for 36 states.

A further analysis shows that 2021 National Assembly budget of N128 billion, which has less than 10,000 individuals on its payroll, surpasses the annual budgets of Yobe State (N107 billion), and Nassarawa (N115 billion) with populations of more than 4 million people.

“We can’t continue this way, for years the same call this same request yet nothing has been done,” a civil servant with Lagos State government told RipplesMetrics.

“My monthly pay is N50,000, how do I survive as a man, eating the same food and paying for same electricity tariff in one country.”

“It is high time Nigeria began to look at cutting down government expenses. Working as a public official is not a source of wealth but service to better the lives of your fellow Nigerians and country,” Chinedu Amadu a lecturer said.

“How can we grow as a nation when politicians ensure that they are taking care of before the needs of the general public, it is imperative the calls for accountability from the National Assembly be heard and save millions of Nigerians from impending poverty.”

In 2020, one of most challenging for households, the World Bank reported that 11 million Nigerians fell into poverty, with the number of poor people set to rise to 90 million by 2022.

With critical development sectors begging for attention, legislators’ bumper pay raises some glaring questions on who the budget is meant for.