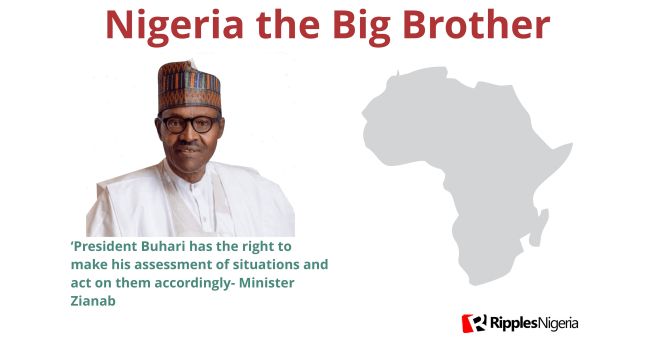 The news of President Muhammadu Buhari administration’s N1.14 billion gift to Niger Republic has continued to trigger outrage among many Nigerians.

They wonder why amid dwindling revenue, and university lecturers strike, the federal government decided to play a big brother role.

The leaked document from the Budget Office showed the funds were to be made to Kaura Motors Nigeria Limited, supplier of the 10 Toyota Land Cruisers V8 vehicles to the Nigerien Government via its Fidelity Bank Account.

In justifying the move, Minister of Finance, Budget and National Planning, Mrs Zainab Ahmed, said while Nigerians have the right to ask questions, President Buhari, who approved the purchase, also has the right to make his assessment of situations and act on them accordingly.

According to Ahmed, the donation was to help Niger Republic address its security concerns and that such donations by Nigeria to its neighbours were common.

Similarly, a former Comptroller-General of the Nigerian Immigration Service, Mohammed Babandede, argued that Nigeria is doing nothing wrong with donating to other African countries.

Such gestures, he said, were important, and the “noise” surrounding the revelation unnecessary because Nigeria’s border starts where Niger Republic’s ends and is also part of the Multinational Joint Task Force arrangement.

This is not the first time President Buhari’s administration’s donations have caught the attention of many Nigerians.

In March this year (2022), the federal government announced the donation of $1 million to Afghanistan.

Hissein Brahim Taha, Secretary-General of the Organisation of Islamic Cooperation (OIC) revealed the funds will help in its humanitarian efforts.

A statement from the organization reads: “The Secretary-General of the Organization of Islamic Cooperation (OIC) Hissein Brahim Taha has commended with appreciation the generous donation of one million dollars made by the Republic of Nigeria to the Humanitarian Trust Fund for Afghanistan.”

In 2016 during recession, Nigerian government also made a generous donation of 15 cars and 100 motorcycles to the electoral commission of neighbouring Benin

He said, “I want to say bravo to President Muhammadu Buhari, the government and the people of Nigeria, and the diplomacy of the Federal Republic of Nigeria.”

Another donation that caught the eyes of Nigerians, and approved by president Muhammdu Buhari, is a $500,000 donation to Guinea Bissau to support the country’s election process.

This again follows an urgent request for assistance by the Government of Guinea Bissau.

Other donations to countries come in the form of military assistance in peacekeeping missions which according to Oluwole Oke, a House of Representatives member, has cost the country $8 billion.

The Beneficiaries he noted include Cote d’Ivoire, Guinea-Bissau, Liberia, Mali and Sierra Leone.

Why it is important

Without a doubt, Nigeria is one of the richest economies in Africa, in terms of size and Gross Domestic Product, but a country’s wealth is largely determined by the quality of life of its people.

Globally, Nigerians remain one of the poorest people in the world.

According to data from the World Poverty Clock, WPC, there are 83m poor Nigerians, 39 percent of the total population.

More damning is a World Bank report which notes that 1 million Nigerians of the already projected 6 million are expected to fall into the poverty bracket by the end of 2022.

It is clear why there is so much angst against Nigeria’s recent donation to the Niger Republic.