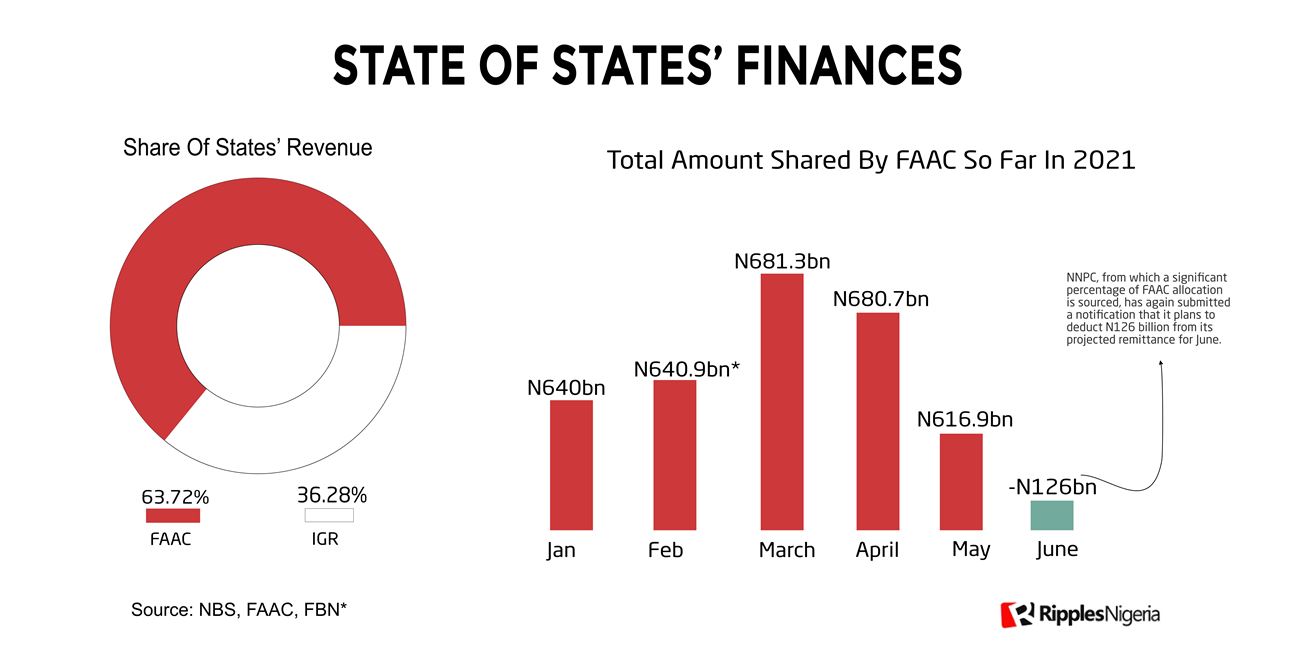 Nigerian state governors are in a difficult position and far from fiscal sustainability as a result of decreasing revenue from the federal account.

As a result, Governors will have to rely more on funds generated internally to guarantee the proper running of all ministries, departments, and agencies in their states.

In April, the gross monthly distribution by the Federation Account Allocation Committee (FAAC) to the three tiers of government dropped to N680.7 billion from N681.3 shared in March.

Similarly, amount shared to states and local government dropped by N63 billion to N616bn in May.

The Nigerian National Petroleum Corporation (NNPC), from which a significant percentage of FAAC allocation is sourced, has again submitted a notification that it plans to deduct N126 billion from its projected remittance for June.

This will come as very tough news for at least 33 of the 36 states which rely heavily on the federation account to pay salaries and commit to development projects.

According to NBS data for 2020, total state revenue was N3.59 trillion, of which 36.28 percent or N1.30 trillion was internally generated through taxes, PAYE, royalties, levies and fines while 63.72 percent or N2.29 trillion was from FAAC.

Ripples Nigeria breakdown of the financial worthiness of states, in the event that FAAC allocation is no longer available, shows that out of every N100 needed to pay wages and other necessities, only three states Lagos, Ogun and the Federal Capital Territory can generate at least N50 on its own for operation.

How viable are state governments in ranking?

Using a metric we call the viability index, computed as the IGR as a percentage of the total revenues(FAAC+IGR) , Ripples Nigeria analysis shows that Lagos State, the nation’s commercial nerve centre, is the most viable state with the rank of 78.3 percent. Meaning that it could generate N78 out of every N100 it requires for efficient operations.

FCT and Ogun came in second and third with 57.8 and 57.3 percent respectively, meaning both states could generate at least N57 of every N100 it requires for efficient functioning.

These are the only states that could generate above fifty percent of their required funds internally.

Rivers State is ranked third with 45.3percent, implying that the state could generate N45 out of every N100 it requires without recourse to FAAC.

At 44.5 percent, Kaduna State could generate at least N44 out of every N100 it needs for day to day running of government business and is ranked fourth on the viability index.

Oyo and Osun states with 41.4 and 39.1 percents occupy the fifth and sixth position. This implies that each of these states could generate at least N41 and 39 out of every N100 required for the day to day to running of the activities of government. The states also complete the number of states that can boost of revenue beyond the IGR national average of N36.

Other states to complete the top 10 states include Anambra, Plateau, Ondo and Cross River.

Anambra’s 35.4 percent means it can only generate N35 out of every N100 it requires for its daily activities.

Plateau is ranked eighth with 34.9 percent of its revenue generated internally. Ondo is ninth with 34.7 percent, and Cross River with 32.9 percent ranks tenth.

For the bottom states, with less than N15 internally generated revenue, Bayelsa occupies the bottom of the viability index,
as it can only generate 9 percent or N9 of its revenue from internal sources and has to rely heavily on FAAC.

Jigawa and Yobe are the second worst from bottom with only 13.3 and 13.5 percents of their revenues generated internally, which translates to N13 of 100 needed to pay salaries and other developmental projects.

All of this means that if FAAC allocations cease flowing in, states will be as good as non-operational since Internally Generated Revenue (IGR) reflects a state’s fiscal health and economic viability.

Most states with low IGR end up borrowing to cover recurrent and capital expenditures for the current fiscal year. There will be a backlog of pay, infrastructure deterioration, and unfinished projects.

If the downward trend in FAAC allocation continues, it would only be a matter of time for states to consider the Kaduna State model which recently terminated civil officials 50 years old and above, as well as those on Grade Level 14 and above, even if they were younger than fifty years.

As a result, it is critical for states to care for their expenses, minimize dependency on federal allocations, and develop effective strategies to boost IGR and look inwards for additional revenue-generating components.

RipplesMetrics: Data reveal 5 out of every 10 classrooms unfit for learning as Nigeria marks Children’s Day