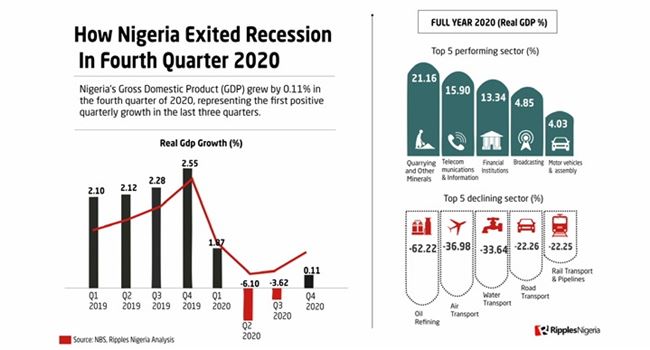 On Thursday, the National Bureau of Statistics (NBS) released Nigeria’s Gross Domestic report to show how the economy had fared in 2020.

While some sectors recorded growth despite the challenges of the pandemic and an economic recession, some other sectors plunged, living workers in those sectors fearing for their jobs.

Within the year, the second and third quarter drove Nigeria into recession before a surprising rebound in the fourth quarter to 0.11 percent.

During the year, Ripples Nigeria observed the following sectors as the best and worst-performing sectors in 2020.

Quarrying and other Mineral sector

The Quarrying and other Mineral sector emerged the best performing sector in 2020, growing 21.16 percent.

This sector drove the overall performance of the information and communications sector to 12.90 percent, up from 11.08 percent recorded in 2019.

Financial institutions emerged as the third best performing sector in 2020, growing by 13.34 percent compared to 2.24 percent in 2019.

Although the sector contracted 2.48 percent in the fourth quarter of 2020, the contraction was offset by the strong growth recorded in the other quarters.

The broadcasting sector alongside the telecommunication sectors were the only sectors that boosted the growth of the information and communications sector.

While some sectors stood resilient some other sectors in the economy could not withstand the pressure from the pandemic. These sectors were;

Air transport recorded a 5.68 percent in the first quarter of 2020 after which it contracted by 57.38 percent, 38.86 percent and 51.69 percent in the second, third and fourth quarter respectively.