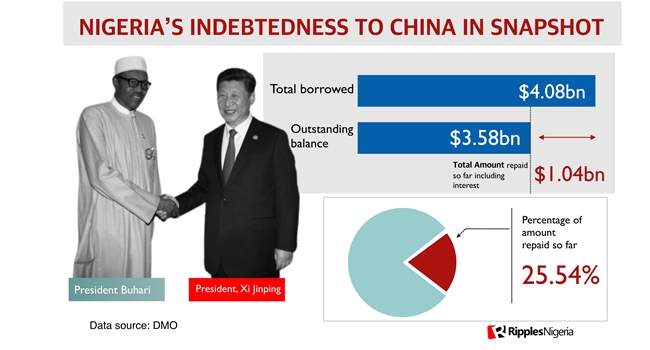 DMO in a document published on its website revealed that the debt comprises N22.43 trillion domestic debt while N15.57 trillion was external.

One of the significant areas of interest for many Nigerians is the loan from China.

Although details of collateral issues in the agreements were not revealed, DMO data show that in the last 15 years, Nigeria has approached China for $4.18 billion.

These loans are tied to 15 projects which include airport expansion, development of agriculture, satellite launch and water supply, among others.

According to DMO documents, the most recent loans from China were agreed on 27 December, 2019.

The loans agreed on were for the expansion of four airport terminal expansion projects and Nigeria’s ICT infrastructure backbone project.

The interest rate for the loans is 2.75% and Nigeria will start repayment from 2026.

Further data analysis of the other loans is contained in the screenshot below.

The Federal Government plans to take fresh loans amounting to about N15 trillion in the next three years.

The estimated loans are evenly split between domestic and external sources.

ICYMI…RipplesMetrics: Nigeria’s economy in 2021 in 10 numbers

ICYMI… RipplesMetrics: Despite interventions, Nigeria is still largest importer of rice in Africa