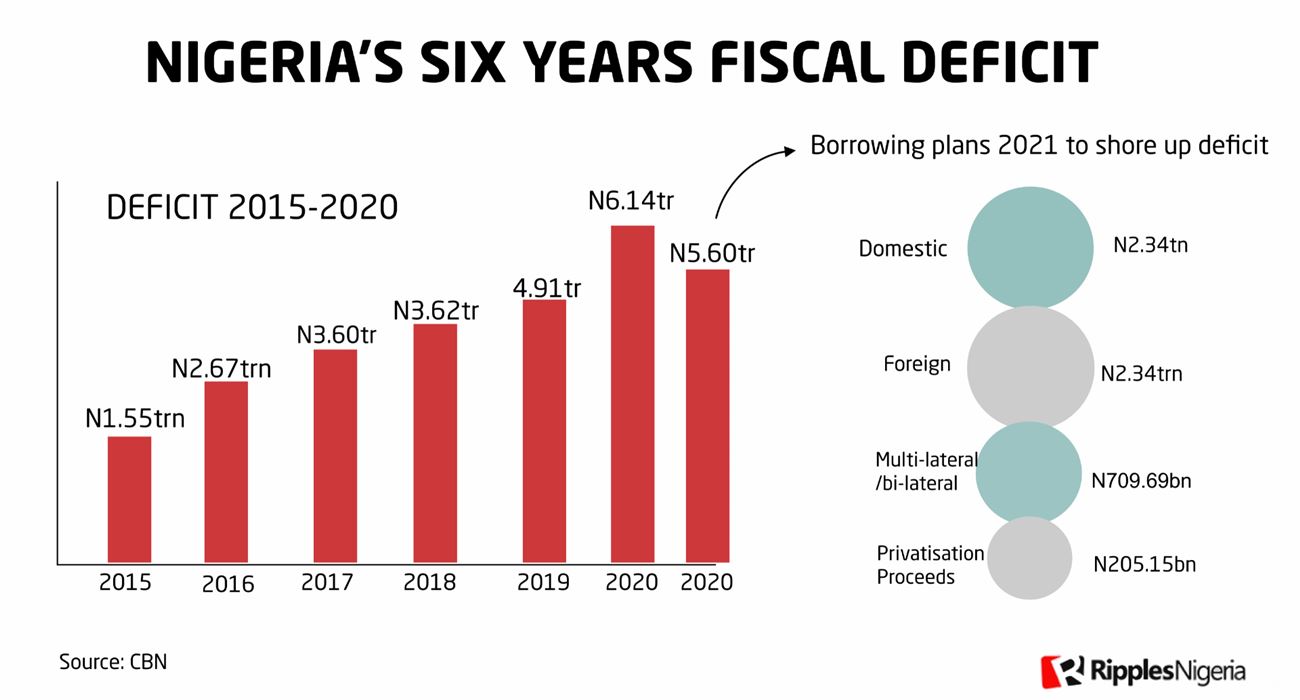 From 2015 to 2020, the Federal government of Nigeria under the administration of President Muhammadu Buhari accumulated over N22.52 trillion in fiscal deficits. This is according to data obtained from the Central Bank of Nigeria and analysed by Ripples Nigeria.

Fiscal deficit refers to the excess of expenditure over revenue of the government.

During the period under review, Nigeria’s retained revenue was N22.38trillion compared to an estimated N44.1 trillion spent.

For 2021, the federal government overall fiscal deficit is N5.60trillion. When compared with the global figures for 2009-2014, data from the Central Bank of Nigeria show the total budgeted revenue was N20.7 trillion, total budgeted expenditure was N26.7 trillion while the total estimated deficit was around N6 trillion.

In 2015, Nigeria’s economy expanded by 2.6 percent before declining to 1.6 percent in 2016 in Nigeria’s first recession in a democratic administration.

Although the GDP for 2020 is yet to be revealed, the federal government has a forecast of 4.3 percent decline.

Ripples Nigeria had reported that in 2020, for every N100 Nigeria, earned the country spent N82 servicing its debt, a clear explanation of why the country is experiencing a yearly deficit.

The situation looks unlikely to improve considering that the N13.6 trillion spending plans for 2021 also has a fiscal deficit of N5.6 trillion and an economic growth projection of 3 percent.

In her presentation on budget spending in 2020, the Minister of Finance, Budget and National Planning, Zainab Ahmed, revealed that the federal government recorded N6.1 trillion in fiscal deficit in 2020 which is 4.3 percent of GDP above the Fiscal Responsibility Act benchmark.

The fiscal responsibility act clearly states each financial year shall not be more than the estimated aggregate revenue, plus a deficit, not exceeding three percent.

Only time will tell if the growing deficits will bring about much needed economic growth for Nigerians.