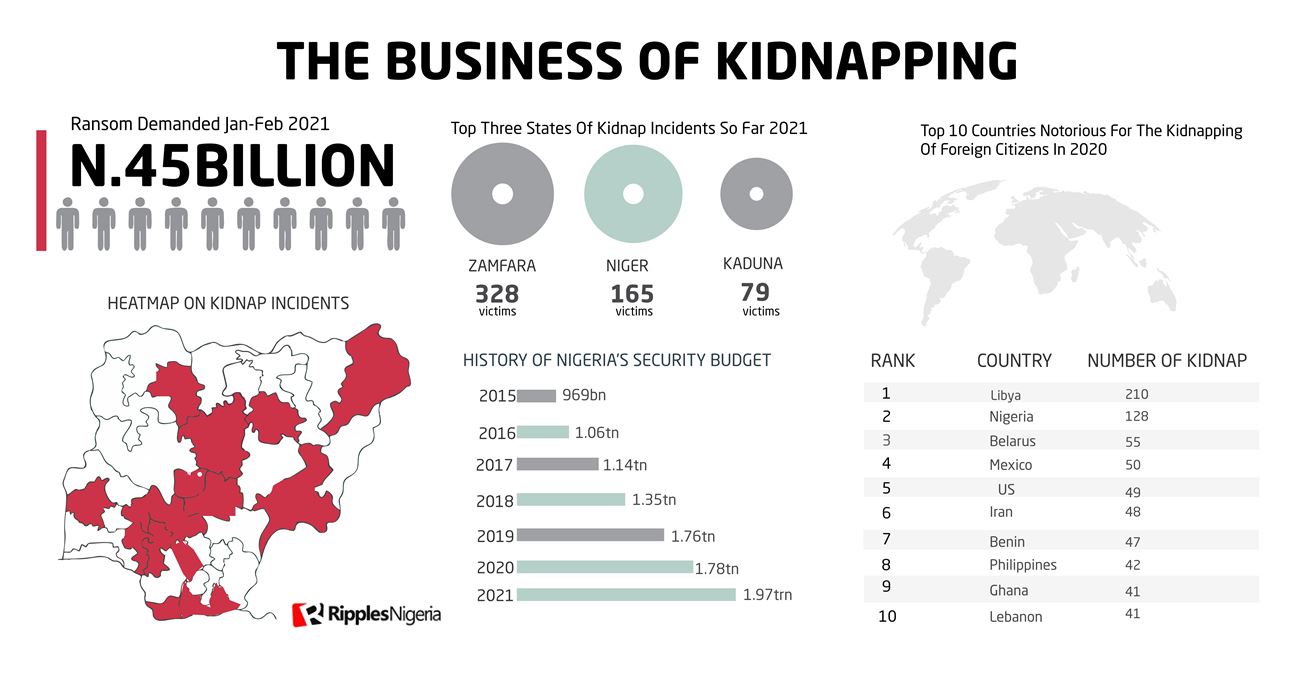 Kidnapping has become somewhat an extraordinarily lucrative enterprise in Nigeria. Between January and February, kidnappers abducted over 897 persons across the country, demanding over N451 million.

The victims include farmers, drivers, traditional rulers, politicians, bankers, the elderly, children, lecturers, students, among others.

Ripples Nigeria’s findings represent the reported cases across the country in the media within the period. It is believed that the ransom demanded could be higher when the official figures of incidents of kidnap are released by the Nigerian police force.

The ransom demanded ranged from N1 million to as much as 100 million during the period.

Kaduna is another state that was on the claws of the kidnappers during the period.

The highest ransom demanded was in Oyo State. The sum of N100 million was requested from the family of Odetunde Emmanuel a University of Ibadan undergraduate.

Followed by the N60 million demanded from Suleiman Akinbami, a petroleum dealer in Ekiti State.

Although, some media reports alleged that N800 million was paid for the release of the 42 students and teachers kidnapped from Government Science College Kagara on February 17th, thus has been denied by Niger State government.

The lowest ransom reported during the period was N1 million paid for the release of Alhaji Kabiru, Adamawa United driver abducted in Benin expressway. The kidnappers had earlier demanded N50 million for his release.

Within the two months under review, over fifteen lives were reported to have been lost in separate kidnapping events.

The most recent was reported on February 27th when bandits, stormed two LGAs of Niger State leaving six dead.

A case too many

In the last nine years (June 2011- March 2020); data by SBM Intelligence, a research outfit noted that a total of over $18 million that is about N6.8 billion was paid to kidnappers.

According to the report titled ‘the economics of Nigeria’s kidnap industry’ SBM revealed that between January 2016 and March 2020 alone, $11 million (N4.19 billion) was paid out by victims.

Kidnapping first gathered momentum as a fight against environmental degradation in the Niger Delta.

Then with the debut of the Jihadist group, Boko Haram, particularly in Northern Nigeria, the sectarian group became infamous for abductions in the North-East region.

The recent development involving some criminal Fulani herdsmen and bandits kidnapping only came to full public attention in 2019.

Nigeria in the eyes of the world

Globally, Nigeria has been regarded as one of the high-risk countries for an expatriate to work due to the spate of kidnapping incidents.

The recent January 2021 edition of Constellis’ Kidnap for Ransom Insight Report indicated that Nigeria and Libya accounts for over 70 percent of cases of kidnapping in Africa.

According to the report, between November and December in 2020, Nigeria ranked second in the world behind the USA for the kidnapping of foreign citizens living in the country.

Thirty-five foreign citizens were recorded in Nigeria representing 17.8 percent of the global total. While the USA recorded 42 incidents representing 21.3 percent.

Other countries to make the top 10 for the kidnapping of foreign citizens include Libya in 3rd place with 32 kidnapping representing 16.2 percent.

In 2019, the report noted that 128 cases of kidnapping of foreigners occurred in Nigeria which represented 22.6 percent of the global average, the second-worst in the world.

Data from the 2021 Economic Value of Peace report by the Institute for Economics and Peace (IEP) shows that within 13 years – from 2007 to 2020, Nigeria has lost over $1.34 trillion as the cost of violence in Nigeria. The figure was calculated as security expenditure to manage violence as well as its economic impact.

According to the National Bureau of Statistics (NBS) capital importation report, seven of the states failed to lure single foreign investor.

To further understand the impact of the rising cases of kidnapping, and insecurity, the 2020 Global Peace Index (GPI) report ranks Nigeria as one of the least peaceful countries in Africa and the world.

Nigeria occupies 40th position out of 44 countries in sub-Saharan Africa, and 147th globally.