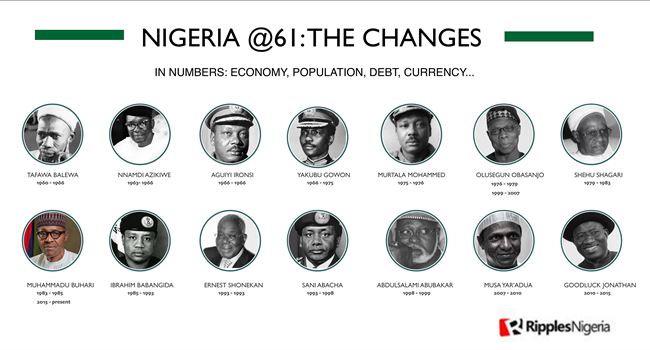 It is worth looking back at how far the nation has come and the different socio- economic changes.

Nigeria’s population statistics have long been contentious, owing to the division between the south and the north, as well as other factors.

However, figures from the World Bank and the United Nations Department of Economic and Social Affairs suggest that Nigeria had a population of 45.1 million in 1960.

Nigeria has not conducted a population census since 2006, thus the National Population Commission depends on the World Barometer estimate of Nigeria’s current population of 212.8 million.

On literacy level, the latest figure from the National Bureau of Statistics shows that the percentage of people who can both read and write, with understanding of a short simple statement about their everyday life, stands at 62.02% .

This is quite a remarkable achievement when compared to the 40% in 1960.

What this means is that at least over 132 million Nigerians can read today in 2021.

Gross Domestic Product or GDP represents the economic health of a country.

When Nigeria declared its independence in 1960, its GDP was $4.2 billion, the lowest in the period under review.

According to latest figures from the NBS, Nigeria currently has a real GDP of $514 billion.

However, while the nation’s growth since 1960 is certainly laudable, this has unfortunately not percolated into real economic changes in the life of Nigerians.

Despite the significant expansion in the economy, the per capita income is not at pace to adequately cater for the country’s population growth.

This imbalance, according to NBS as at 2020 pushed 40 percent or 83 million Nigerians into poverty.

Although Nigeria’s poverty profile for 2021 has not yet been released, it is estimated that the number of poor people will increase to 90 million, or 45% of the population, in 2022.

It is easy to find the answer as to why there is a significant increase in poverty in the country.

This increase was even made more significant when you consider that the exchange rate for Nigerian currency to the U.S dollars was N0.71.

As at the end of Thursday trade, on the eve of independence, Naira exchanged to the U.S dollar N413.38 at the official market while at the black market it stood at N570.

RipplesMetrics: Key numbers of 2022 budget as Buhari expects economy to grow fastest ever under his govt