RipplesMetrics: Nigeria may end 2020 worse than it started, and it’s not only about COVID-19 | Ripples Nigeria 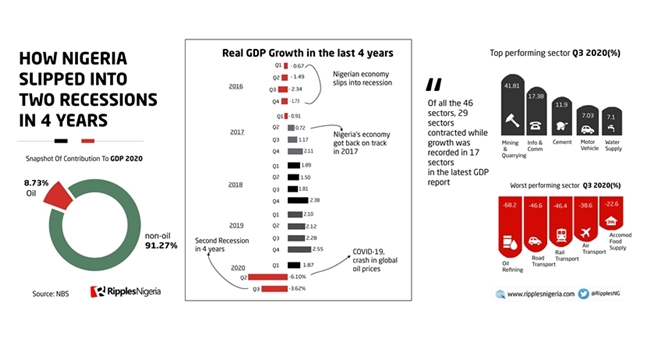 Holiday season is coming at the worst possible time for millions of Nigerians.

Already, it’s been an economic calendar to forget and things look like they’ll get worse in the run-up to December 31st.

On Saturday, 21st November, the National Bureau of Statitics announced Nigeria economy was in recession, slumping by 3.62% in second quarter of 2020. The country had earlier recorded a negative 6.10 per cent growth in the second quarter.

The recession announcement follows October inflation figure of 14.25 per cent, the highest in the last 30 months.

While the latest GDP figure was expected, considering the snail-like scenario growth since 2016, Nigerians will be hoping the government economic policies will help the country exit as quickly as possible, and also keep to its promise of  projected  6 percent growth in its 2021 proposed budget.

A cursory look at GDP figures shows Nigeria had the best growth quarter on quarter, an outstanding +12.1% QoQ GDP Growth rate and improving from -6.10% in Q2 2020.

However, trying to make sense of the improvement will be a little harder to coming out of recession itself.

A closer inspection of the figures shows where the country missed it and spells doom for millions of Nigerians.

Of all the 46 sectors, 29 sectors contracted while growth was recorded in 17 sectors. Trade sector which not only accounts for 15% of the economy growth but also employs millions of Nigerians was badly hit.

An unpalatable storm heading to the end of a torrid year, when added to the rising food prices, with October inflation figure of 14.25 per cent representing the highest in the last 30 months, and 21.7 million unemployed population.

Read also: RipplesMetrics… Every month Nigeria will pay N68.5 billion for due external debt in 2021

NBS had earlier reported in its COVID-19 impact report for the month of August 2020 that many households have had to take out loans to meet their pressing financial obligations with majority reporting it was food.

“In summary, a recession is normal business cycle, but if you do bad policies (like closing border) you make Agege bread expensive to produce so the loaf price goes from N50 to N150 Again this makes the bread expensive and reduces sales and cycle starts again”

How Nigeria will exit this recession which experts have considered to be worst than that of 2016 remains to be seen but one thing is certain, Nigeria needs a plan.

Biden to nominate Antony Blinken as US secretary of state