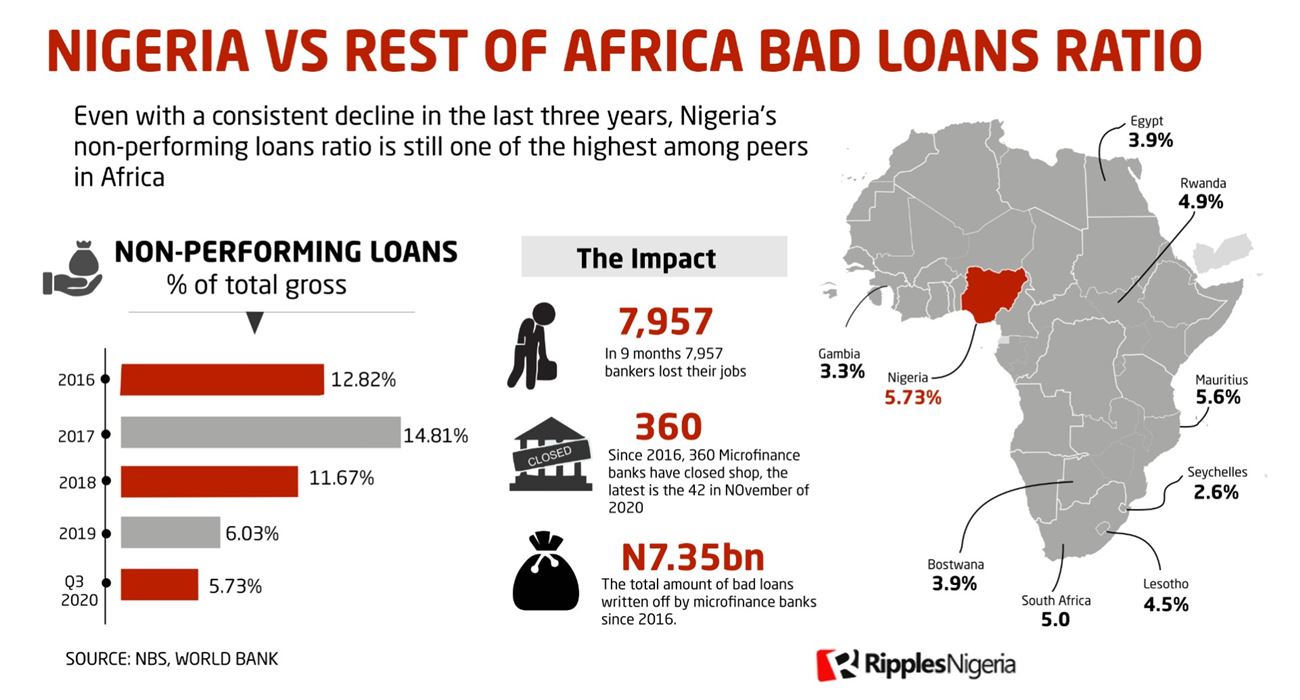 Even with a consistent decline in the last three years, Nigeria’s non-performing loans ratio is still one of the highest among peers in Africa at 10th place.

The latest banking data published by the National Bureau of Statistics (NBS) reveal that out of the N19.46 trillion loans given out to customers in the third quarter, 5.73 per cent which is N1.16 trillion is in default, a figure higher than nine other African countries.

A non-performing loan (NPL) or bad loans are debts that have received no scheduled payment in over 90 days, hence regarded as default.

Though data from NBS show a demonstrable positive momentum from CBN in bad debts recovery, the numbers, however, show that bad debts are still off their lowest in December 2014 when they stood at 2.9 per cent against the recommended 5.0 per cent prudential requirement for a healthy banking sector.

A further analysis of the figures from NBS shows that bad loans recovery hasn’t yet staved off on microfinance banks that serve micro-entrepreneurs and low-income households as there is a 199.8 per cent increase of bad loans from N125 million in first quarter to N377 million in third quarter.

It becomes even more worrisome, as the data also revealed that over N7.35 billion bad loans had been written off in five years, with 318 microfinance banks closing shops in three.

Just last month (November, 2020), another 42 microfinance banks were liquidated as part of series of clean up by the two banking regulators NDIC and CBN.

“Most MFBs have been battling with high level of non-performing loans which had inevitably resulted in high portfolio risk (PAR) which impaired their capital and liquidity to do businesses. With Nigeria contributing the most with 6.6 million to the rise in global poverty, it even becomes scarier,” Omobola Kunle a research analyst explained.

Victor Opara, an economist, further explained that huge bad loans are the bane and nightmare of most banks.

“It is on record that most large banks that went under in the past was a result of humongous toxic loans in their books, which largely squeeze their ability to meet depositors obligation as at when due”

According to available research, countries with low non-performing loan ratio tend to experience faster GDP growth rate. Non-performing loans decrease banks’ willingness and ability to lend as the banks tend to spend time looking to recover on such loans than making new loans.

With Asset Management Corporation of Nigeria (AMCON), which was established to help buy bad loans and salvage the industry from collapse following the financial crisis of 2009, winding up by 2023, it is important CBN continues on the momentum to address this issue of non-performing loans.