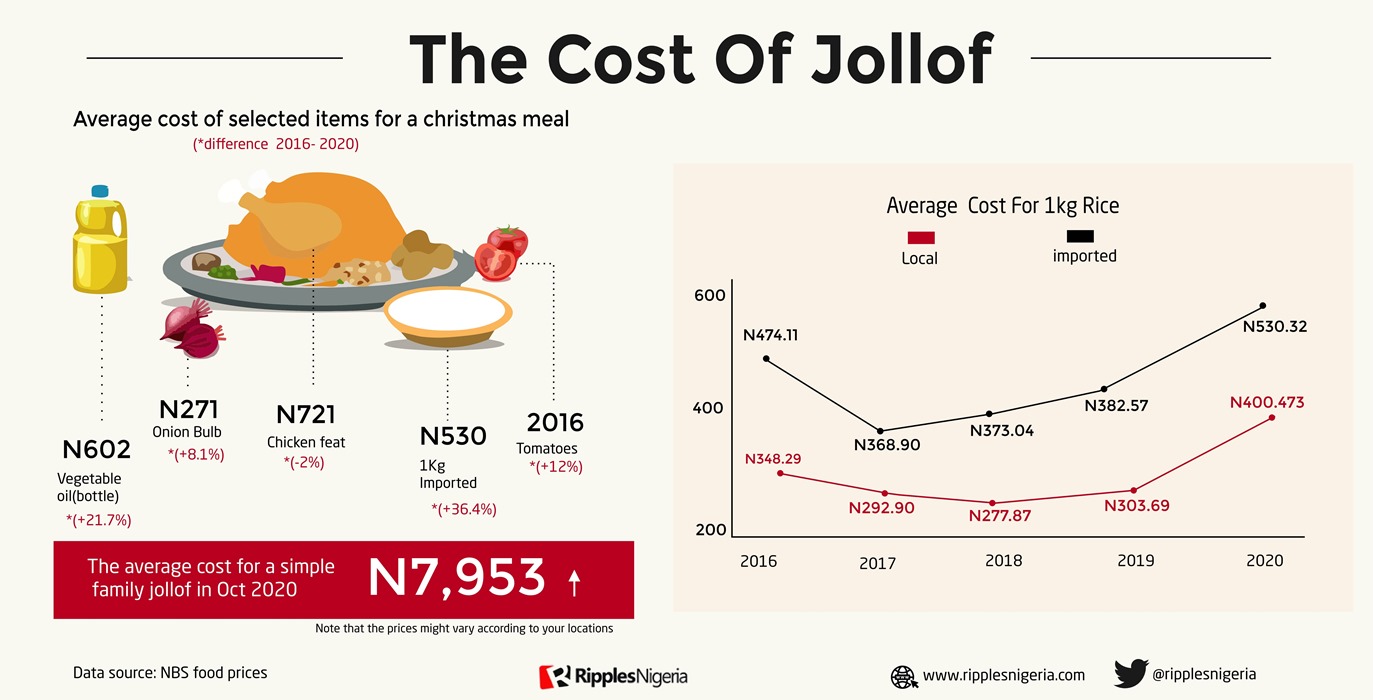 It is not yet shopping season but, ahead of Christmas, preparing Nigerians favorite delicacy during festive periods- Jellof rice- will cost families 54.9% more than it did in 2016, according to food prices data from National Bureau of Statistics.

RipplesMetrics analysis of the figures shows that in making a simple pot of Jollof which includes a 1kg bag of rice, tomatoes, vegetable oil, groundnut oil, an onion bulb, 1kg frozen food, cost rose from N5131.87 in 2016 to N7953.03 as at October 2020.

Christmas is celebrated every December 25 to mark the birth of Jesus Christ, and is regarded as one of the most important dates in the Christian calendar celebrated with mostly jollof.

The cost of rice (Imported), the main ingredient in Jollof, shows an increase from N19,439 for a 50kg in 2016 to N26,512, according to the NBS data. Prices of domestically produced grain which the Nigerian government tried to promote after it shut borders to neighboring Benin and Niger in August 2019, to curtail smuggling, also went up from N14,000 in October 2016 to N20,000 in October 2020.

Alternatives to some of the ingredients for a family Jollof rice is not also encouraging. For example, a Mackerel fish which would have been used to substitute a frozen chicken sold at N759.01 in 2016 but now sells for N1100; Just as a Titus frozen fish also increased to N1051 from N884 in 2016.

To have a full picture, Ripples Nigeria visited the Ikotun market in Lagos to confirm the prices for the item as published by NBS, and found the figures were actually a lot higher.

“I have never seen this type of price jump since I have been trading in this market for over 10 years. This is really sad, only God knows how Nigerians will celebrate this coming Christmas.”

A look at other economic numbers shows further how Nigerians are in for a very tough Christmas.

National Bureau of Statistics latest employment statistics, between 2016 to second quarter of 2020, say over 10 million Nigerians disappeared from the job market, and during the lockdown in April, NBS further revealed 4 in 10 Nigerians lost their jobs.

“This is really going to be a very low key celebration for Nigerians, it will require a lot of sacrifice, adjustments and prudence in the management of resources to navigate the economic storm, the year 2020 is already tough enough,” Mobola Audu a consumer analyst told RipplesNigeria.

“I fear what December holds for different families, so many are without jobs, we are in recession, food prices is skyrocketing.”

Adekunle Ajayi, a 35-year-old father of three who works as a bank security operative in Ketu, told RipplesNigeria that for his family, “anything we see we will eat, hopefully a miracle happens, if not my children will have to forget about this year.”