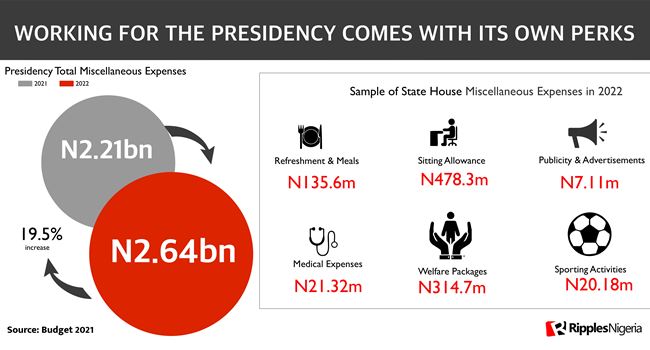 Amid concerns Nigeria’s 2022 Budget is loan-backed and bogged down by debt financing, President Buhari’s administration will be spending almost a trillion Naira on items that may never be accounted for.

These items which fall under miscellaneous expenses are hardly recorded into the Open Treasury Portal (OTP) and when they are, the information is vague.

OTP is an accountability platform, established in 2019 which seeks to enable “timely availability of financial information to the civil society organizations and the public at large by all MDAs of the federal government”.

The platform expects that Accountant General of Ministries, Departments and Agencies (MDA’s) provide transaction details along with receipts for spending in the region of N5 to 10 million for publication on the OTP.

However, due to the fact the miscellaneous expenses are small and infrequent transactions throughout the year, they are rarely documented on OTP and hence referred to as invisible expenses by civil societies and concerned Nigerians.

Ripples Nigeria had reported that the 2022 proposed budget of N16.39 trillion was submitted by President Buhari on October 7th with a deficit of N6.29 trillion, and N5.01 trillion expected borrowing.

Despite this pressure, miscellaneous payments were not only a prominent feature of the budget but they appeared 721 times.

These expenses consist of refreshment and meals, honorarium and sitting allowance, publicity and advertisements.

Read also: RipplesMetrics: Key numbers of 2022 budget as Buhari expects economy to grow fastest ever under his govt

For this analysis, Ripples Nigeria was only able to examine the expenses of 172 MDAs.

The total budgeted amount for Miscellaneous expenditures for the MDAs examined was N14.76 billion.

For instance, a breakdown shows the presidency, which is made up of 17 agencies, namely the State House HQ, State House President, Vice President and Lagos Office, NIPSS, EFCC, BPP and NEITI, wants to spend over N2.64 billion on miscellaneous matters in 2022.

At the Budget 2022 presentation, Zainab Ahmed, the Nigeria Minister of Finance was quoted as emphasizing government’s need to borrow, and this begs the question of why Nigeria has to spend so much to fund these transactions.

The Economic And Financial Crimes Commission (EFCC) will also be spending N367.14 million on miscellaneous in 2022.

Also, publicity and advertisements will take N80.29 million while N46.95 million will be spent on medical expenses.

Annual Budget Expenses and Administration is another interesting allocation in the miscellaneous expenses, and EFCC will be spending N20.10 million on it.

This is despite government already paying salaries to staff that prepare budgets and appropriation bills.

Others can be seen from the table below.

ICYMI…RipplesMetrics: The numbers ahead of Anambra State election amid security concerns

RipplesMetrics: Key numbers of 2022 budget as Buhari expects economy to grow fastest ever under his govt