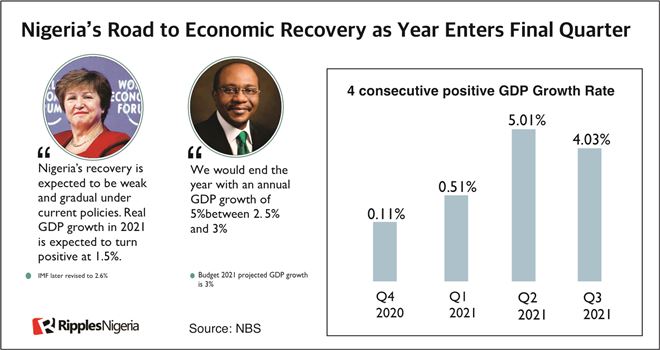 The Nigerian economy started 2021 with much exuberance, having recovered from the second recession under the present administration in the fourth quarter of 2020.

After the surprise exist from recession, expectations were high on its continuous growth. This was evident in the 2021 budget as the government projected an economic growth rate of 3 percent in 2021.

Here are eight charts explaining Nigerian economy so far in 2021

Economic growth, measured by percentage change in Gross domestic product (GDP) data from National Bureau of Statistics (NBS), shows that the economy is on the path of recovery when compared to the Covid-19 battered economy last year.

Nigeria’s recovery in 2021 has been buoyed by two consecutive quarters of positive and increasing growth (Q1 and Q2).

Although the pattern of growth changed in the recently released third quarter result 2021, it is relatively impressive compared to 2020.

One major set back in 2021 is the fall in crude oil production.

Non-oil sector has officially taken over as the major driver of growth in the country.

Since the start of the year the Consumer Price Index (CPI) inflation has been decelerating with October 2021 figure of 15.99 percent the lowest since December 2020.

Inflation rate opened the year at 16.47 percent before hitting a high of 18.17 percent in March.

From the following month, April, inflation rate has been on the decline.

Cost of food continues to rise

Despite various intervention from the monetary and fiscal side of the Nigerian government, and the drop in inflation rate, Nigerians continue to pay more for food every month.

Although NBS reveals the rate at which food prices rise in the country is at 18.34% percent, and has been dropping in recent months, Nigeria has one of the highest food inflation figures in Africa.

The Central Bank of Nigeria has implemented a number of strategies to strengthen the Nigerian currency this year.

Not only was the Naira devalued officially, the CBN has also initiated a clampdown on black market traders and those it perceived are engaged in illegal trading.

The CBN also in the year introduced eNaira which it says will help reduce cost of transaction.

As at Thursday, 18 November, the value of Nigerian currency which closed at N414.80 has dropped by 9.23 percent when compared to the official rate of N380 at the start of the year.

Year-to-Date analysis of the Nigerian All Share Index (ASI) shows that as at Thursday, 18 November, the Nigerian stock market has improved by 5.19% .

The Nigerian Stock Exchange 47.2% growth in 2020 was ranked the best performing in the world according to bloomberg.

And, it seems it is heading towards a repeat despite investors wobbling sentiments.

The Central Bank of Nigeria (CBN)

The Monetary Policy Rate (MPR) has remained unchanged all through the year.

All eyes will be on the November meeting of the Monetary Policy Committee (MPC) scheduled to hold on Monday, November 22, 2021 and Tuesday, November 23, 2021.

The decision to leave the MPR unchanged centred on the belief that raising the rate could hamper the already slowing growth in the economy as domestic credit would become costlier inhibiting investment and leading to a fall in output.