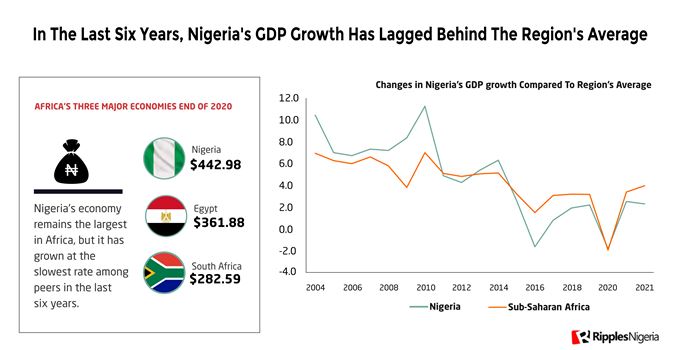 Despite being Africa’s largest economy, Nigeria’s Gross Domestic Product (GDP) has risen at one of the slowest rates among Sub-Saharan African countries during the past six years ending 2020.

This is according to data obtained from the International Monetary Fund and analysed by Ripples Nigeria.

Our analysis of IMF data shows that Nigeria’s broad based growth averaged 0.69 percent between 2015 and 2020, ranking the country 31st on the list of 45 Sub-Saharan African countries.

In fact, further analysis of IMF data revealed that Nigeria’s GDP growth has failed to surpass the regions average from 2015-2019.

In 2016, the economy fell into recession and with a negative growth of -1.62 percent while the region’s GDP increased by 1.50 percent.

While the economy recovered to increase by 0.81 percent in 2017, the region’s GDP accelerated further by 3.08 percent.

Breakdown during this period shows that while Sub-Saharan Africa average stood at 3.81% Nigeria recorded a GDP of 8.35%.

Our analysis shows, Ethiopia recorded the fastest growing economy in the region.