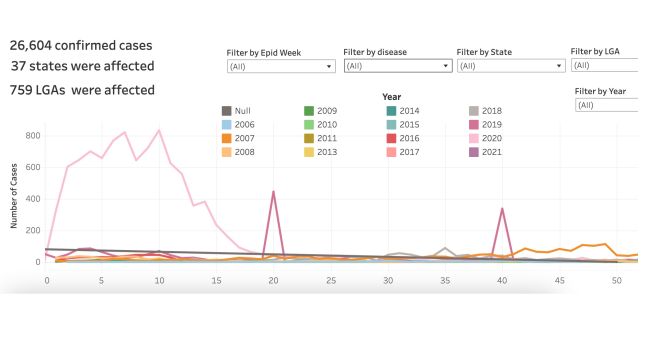 Despite Nigerian government’s effort to control and contain the virus quickly, it has found its way to various parts of the country.

2,837 cases are still in the hospital, and 250,024 persons who contracted the deadly virus have been treated and discharged.

While COVID-19 has generated a lot of media publicity, it is not the only disease residing in over 200 million Nigerians.

Cholera is an acute diarrheal illness caused by infection of the intestine with Vibrio cholera bacteria.

For Cholera, there are 9,476 cases across 36 states and Federal Capital Territory, and 483 LGAs.

NCDC also noted that 50.9 per cent of Nigerians infected are male, and 49.5 cent is female.

Cerebrospinal Meningitis (CSM), acute inflammation of the membranes covering the brain and the spinal cord, is a severe infection that can lead to death if left untreated.

NCDC noted 145 confirmed cases in 13 states and 68 local governments. There are 87 male and 58 female carriers.

Lassa fever is an animal-borne, or zoonotic, acute viral illness spread by the common African rat.

For Lassa Fever, there are 2,256 confirmed cases in 34 states and 190 Local Government Areas.

The other disease captured by NCDC is measles, a severe viral infection for small children but is easily preventable by a vaccine.

There are 14,460 confirmed measles cases across all states and 736 Local Government Areas.

Monkeypox is a rare disease caused by infection with the monkeypox virus.

The disease which is currently ravaging Europe has sent fears across the world.

About 200 confirmed cases and more than 100 suspected cases of monkeypox have been detected outside of countries where it usually circulates, according to the World Health Organization.

Monkeypox virus is mainly transmitted to people from wild animals such as rodents and primates, but human-to-human transmission also occurs.

The virus can be transmitted from one person to another by contact with lesions, body fluids, respiratory droplets, and contaminated materials such as beddings.

Typically, up to a tenth of persons ill with monkeypox may die, with most deaths occurring in younger age groups.

Out of this number, 100 of the infected were males and 34, females.

ICYMI… RipplesMetrics: Sokoto has the worst police-to-citizen ratio. Where does your State rank?