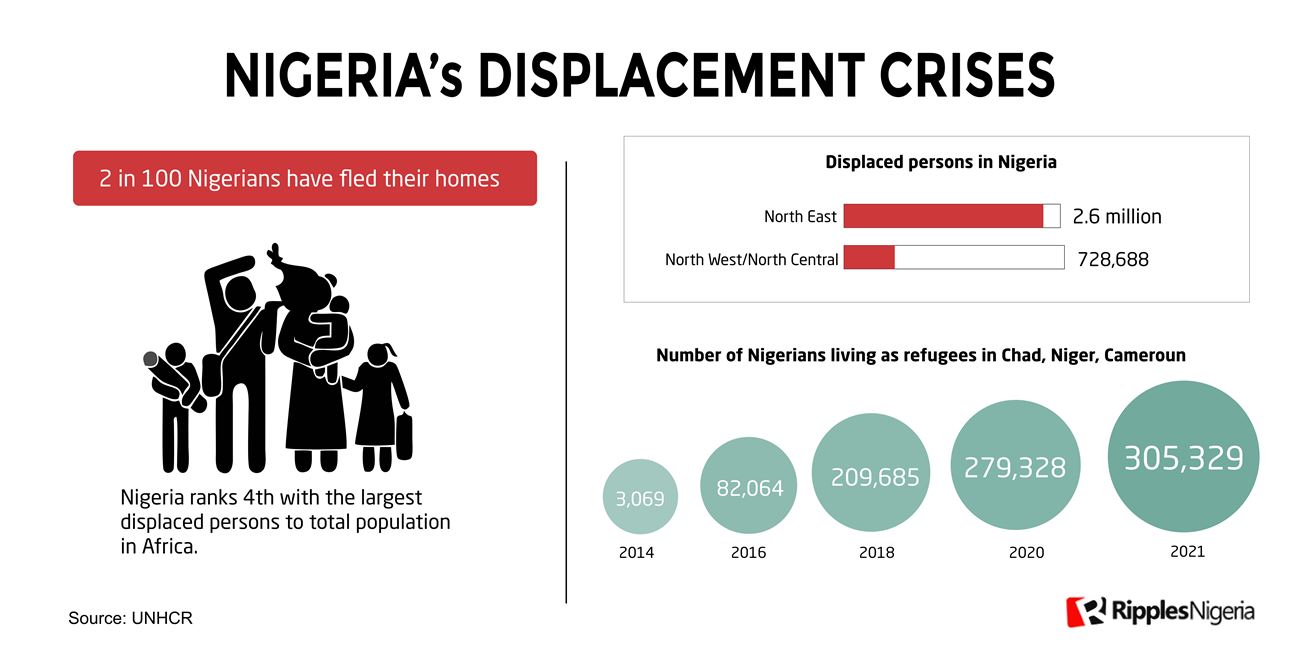 The number of Nigerians fleeing their homes due to conflict and violence is at a record high and now represents over one percent of Nigeria’s population.

This is according to data from United Nations High Commission for Refugees (UNHCR) and analysed by Ripples Nigeria.

UNHCR data, as of April 30, 2021, reveal that at least 2.9 million Nigerian citizens have been sent out of their homes in the last eight years, which represent about 1.50 percent of Nigeria’s over 200 million population.

Out of this number, UNHCR also revealed that no fewer than 305,329 of these displaced Nigerians are living as refugees in Cameroun, Chad, and Niger.

Put in context, what this means is that the number of Nigerians fleeing their homes due to insecurity is bigger than the individual population of seventeen African countries.

Further analysis by Ripples Nigeria of UN Refugee Agency data showed that from 2014 to 2021 the number of Nigerians living in neighbouring countries increased by over 9,000 percent.

The data show that in Katsina there are 80,115 IDPs who have been forced to leave their homes, while Zamfara state is accommodating 70,110 and Sokoto, 36,595.

In fact, from October 2020 to January 2021, over 12,800 additional Nigerians were displaced, and an estimated 70,000 fled into the Niger Republic, UNCHR Data revealed.

Nigeria with the rest of Africa

Nigeria not only ranks fourth in the total number of IDPs to country’s population in Africa, it also accounts for 9.2 percent of Africa’s 29 million displacement crisis.

South Sudan, Eritrea, and CAR, moreover, are three of the top five countries worldwide in terms of share of the population who are refugees

Why is Nigeria’s number of IDPs rising so fast?

According to UNHCR, the Nigerian refugee crisis began in 2014.

A check on Nigeria security tracker, a project of the Council on Foreign Relations Africa program gives a clue.

During that period crimes in the northeast have metamorphosed from just Boko Haram attacks to bandits and herdsmen crises.

RipplesMetrics: A Nigerian Journalist killed every seven months in the last decade