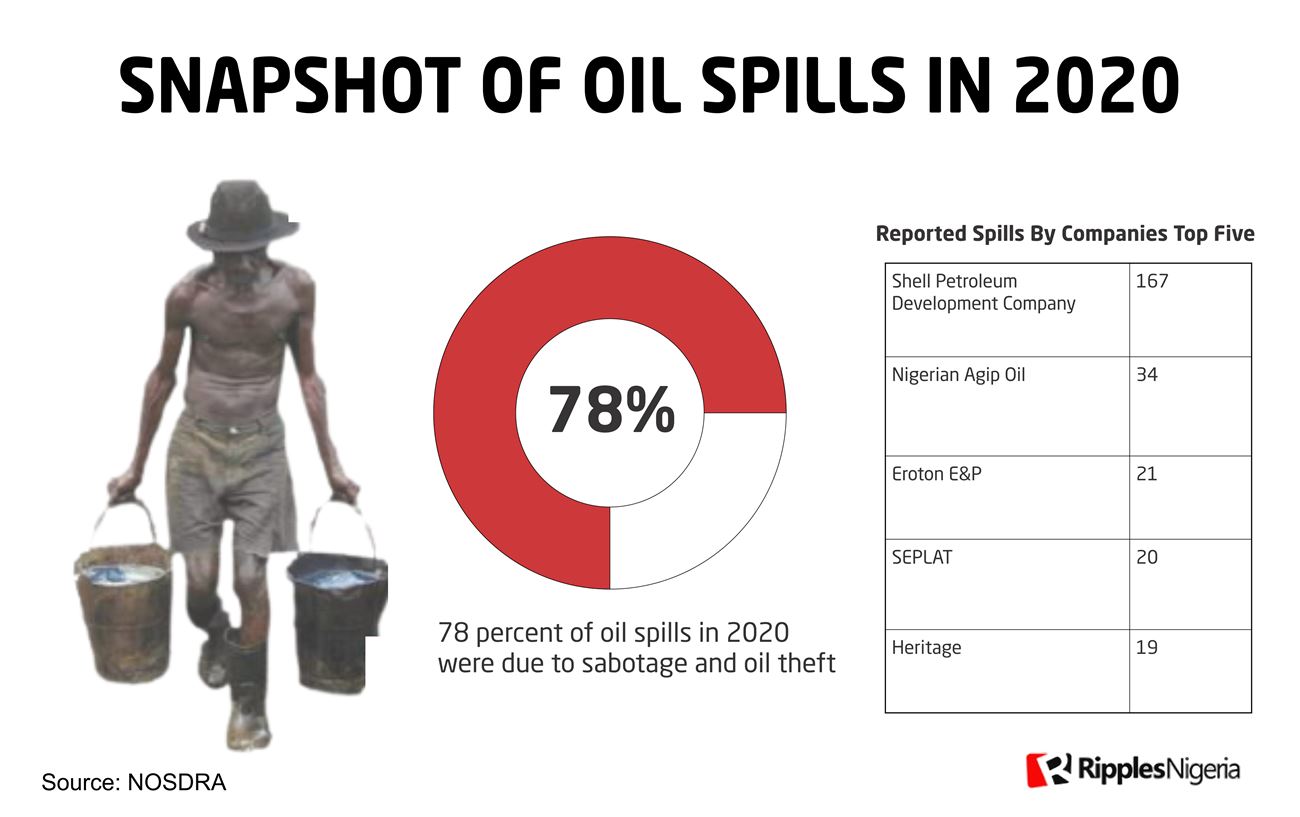 New data from National Oil Spill Detection and Response Agency (NOSDRA) has revealed that 17,262 barrels of oil were spilled into the environment in 2020.

Measured in litres, these spillages are around 2.7 million or 86 full oil tanker trucks according to NOSDRA, a government-run satellite tracker.

NOSDRA data also showed that the spillages occurred in about 334 different incidents across the year.

To better understand the level of impact on the environment, NOSDRA categorizes the spillages into Major, Medium and Minor.

Major spills cover 250 barrels into inland waters, or over 2,500 barrels spilled on land, swamp, shoreline, and the open sea.

While medium spills is said to be about 25-250 barrels into inland waters or 250-2,500 barrels on land, swamp, shoreline and the open sea.

Spills are categorized as minor when 25 barrels spilled into inland waters or 250 barrels on land, swamp, shoreline, and the open sea are reported.

According to NOSDRA out of the 350 cases reported last year, no Major oil spills were recorded, 18 were medium and 245 were minor.

It also noted that the minor oil spill was under 10 barrels in size.

“Out of the total cases of spillage last year, 83 oil spills could not be categorized,” NOSDRA added.

Who was responsible for the leakages?

This was followed by Nigeria Agip Oil(NAOC) with 34 cases while Eroton E&P reported 21 cases of oil spills.

Seplat Petroleum Development Company and Heritage Oil Limited completed the top five with 20 and 19 cases of reported spills during the year.

Oil spills are a serious problem in oil-producing states and have been fingered as the cause of animosity between host communities and oil companies.

By law, when an oil spill occurs a joint investigation team is expected to be mobilized to visit the site.

This investigation team includes representatives of regulatory agencies, the oil company, the affected community, and the security forces.

The team investigates the cause of the oil spill and is supposed to jointly agree and sign a report which confirms the cause and includes other key information such as the volume of oil spilled.

Despite the importance of the investigation, NOSDRA data show 10 of the 350 sites oil spill sites in 2020 were not investigated.

Analysis of NOSDRA data show that of the recorded incidents, 261 were directly caused by sabotage and oil theft representing 78 percent of the total.

Oil companies, on the other hand, directly accounted for 72 incidents or 21.5 percent of the total oil spillages in 2020, NOSDRA said.

While the numbers for 2020 back up the assertion by oil companies that most oil spilled is due to sabotage by host communities, the claim remains highly controversial and even subject of litigation.

Just recently, Ripples Nigeria had reported how a Dutch Court ordered Shell to pay farmers compensation for oil spills in their villages of Goi, Oruma, and Ikot Ada Udo.

Shell had argued in defense that saboteurs were responsible for the leaks. But the court said the company had not proven “beyond reasonable doubt” that this was the case, rather than poor maintenance.

Although the 2020 figure represents a significant drop from previous years, the environmental impact on host communities is still a major challenge.

Oil companies also have been accused by right groups of having a significant influence on oil spills investigations. According to them, the oil companies’ influence distorts investigation and the level of impacts on host communities.

RipplesMetrics: Naira falls by 324% since 1999. What does the future hold?

RipplesMetrics: Number of IDPs in Nigeria higher than population of 17 individual African countries