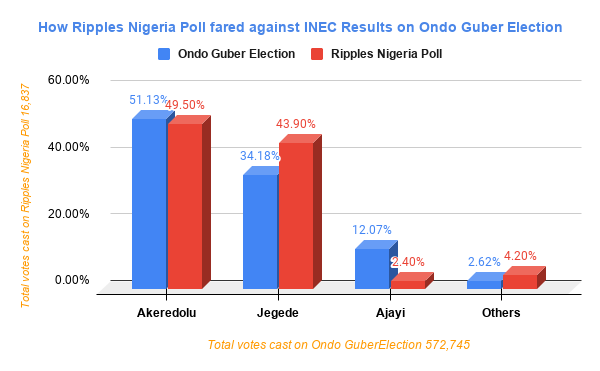 The Ripples Nigeria poll, published October 5, 2020, ahead of the Ondo State governorship election, scored a near perfect prediction of a win for incumbent Governor Rotimi Akeredolu.

Akeredolu was declared winner of the election held on Saturday by the Independent National Electoral Commission (INEC).

With an error margin of 1.63 percent, the Ripples Nigeria poll was almost perfectly close to the mark.

As had been reported, “Both Governor Akeredolu and Eyitayo Jegede had a fair share of the engagements in their favour, while the ZLP candidate, Deputy Governor Agboola Ajayi, had more of the negative trolls, on account of his double defection, first from APC to PDP, and PDP to ZLP.”

It is unsure how the social media conversations may have impacted the final outcomes, as findings overtime have shown that not many commentators go beyond these platforms to exercise their franchise.

It is probable, as claimed in some quarters, that widespread vote buying and violence in the Saturday October 10, 2020 election may have impacted the final results.

Reports by independent election monitors like YIAGA Africa, however, indicate that the infringements were minor, and not enough to question the integrity of the election.