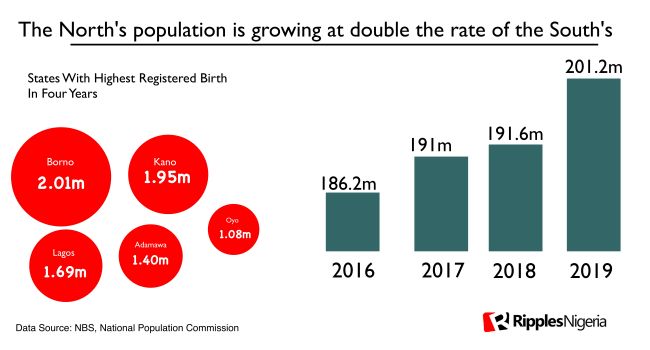 The population of Nigeria has increased by 15.9 million in four years with the northern regions accounting for 68.67% of the new population.

What this means is that for every 10 new children in Nigeria born between 2016 and 2019, seven were from the northern states.

NBS data also showed that more Nigerian women from the south are using contraceptives to prevent pregnancy compared to the northern states.

According to NBS, Anambra state has the highest number of married women who used contraceptives to control their birth (27.4 percent) while Yobe state had the lowest with 1.7 percent.

This decision is reflected in the number of children registered each year across the country.

From NBS records, the South-East and South-South are the lowest regions when it comes to birth registration.

From the analysis above, it shows that northern states’ population is not only growing almost twice as fast as the south, it is also growing faster than Nigeria’s population growth rate!

With the growing wave of insecurity, unemployment, and poverty, it is imperative that the Nigerian government implements policies to help the economy grow faster than the country’s population, otherwise the country’s problems will get worse.