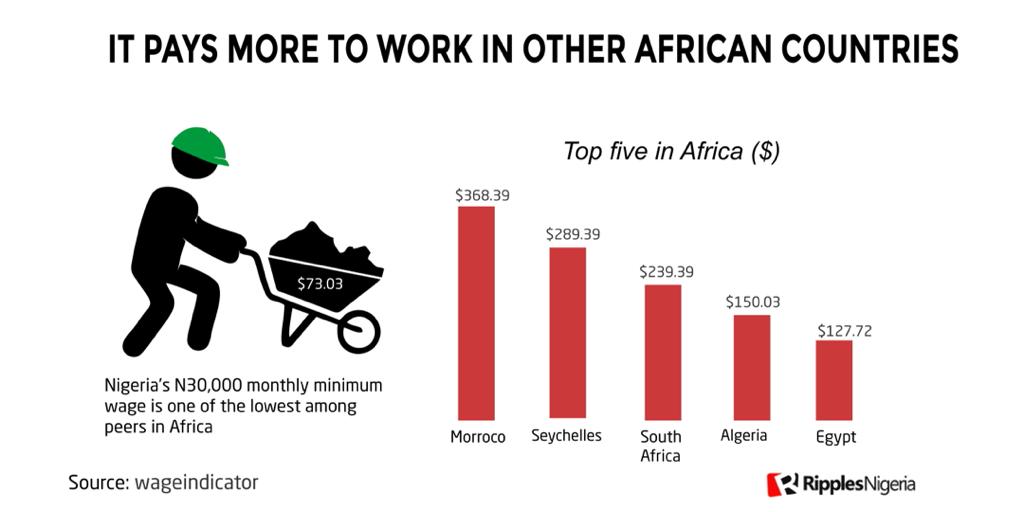 Despite working in the biggest economy in Africa, Nigerian workers minimum wage is one of the lowest in Africa.

Data from Statista show Nigeria’s economy was the biggest in Africa ahead of Egypt and South Africa in 2020.

Nigeria’s Gross Domestic Product (GDP), the benchmark for determining how wealthy a country is, stood at $443 billion in 2020.

Egypt’s GDP was worth $362 billion and ranks as the second-highest on the continent. South Africa came in third with $289.59 billion.

However, Ripples Nigeria analysis of wageindicator.org data show an average worker in Nigeria is paid 80 percent lower than the highest minimum wage in the continent.

In fact, among 10 selected African countries for the analysis, the minimum wage of a Nigerian is the third-worst.

Libya’s minimum wage is 450 local currency which amounts to $100.13 when converted.

Some State governors are yet to pay or agree on the N30, 000 national minimum wages.

President of the Trade Union Congress of Nigeria (TUC), Quadri Olaleye, in an interview with The Guardian, said about 16 states were yet to commence payment of the new minimum wage.

He mentioned some of the States to include Benue, Cross River, Ekiti (only implemented levels one to six with backlogs of arrears on promotion); Enugu, Gombe, Imo, Kogi, Kwara, Nasarawa, Ogun (with huge remittance on deductions); Oyo, Plateau, Rivers, Taraba, Kano, and Zamfara.

RipplesMetrics: A Nigerian Journalist killed every seven months in the last decade