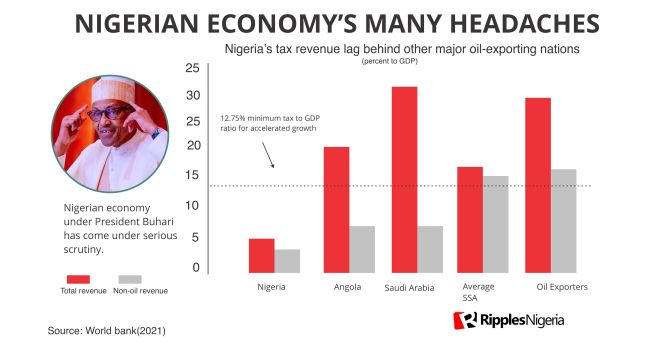 The Nigerian economy has had a difficult seven-month period. This is to the point that it appears the government and policymakers are at a loss on what to do.

Here are seven charts that capture the Nigerian economic situation.

A major issue of concern and challenge for most individuals and companies is the widespread surge in prices of goods and services.

According to data by the Nigeria Bureau of Statistics, NBS, Nigeria’s Inflation has continued on an upward surge throughout the first seven months of the year. Food inflation is even worst.

NBS noted that inflation in July 2022 was 19.64 percent – the highest rate since September 2005. The report also said cost of food increased 22.02 percent in July of 2022 over the same month in the previous year.

One of the major causes of rising cost of goods, services and food experienced by Nigerians is the sharp depreciation of the Naira.

The parallel market, where businesses and individuals are depending more for foreign exchange needs, due to forex scarcity at the official market, is trading between N650 and N700. At the official Investors and Exporters (I&E) window, the exchange rate of the Naira has been artificially pegged at above N430.

Sadly, despite oil prices being well above budget benchmark, NNPC is yet to deposit a single kobo to government account since the start of the year.

Ripples Nigeria in an earlier report detailed how N2.3 trillion earned from oil and gas sales were spent.

Data from NNPC report clearly shows how subsidy is having severe impact on the Nigerian economy.

According to NNPC, in the first six months of 2022, N1.5 trillion of revenue has been spent on subsidy payment which it tags as under-recovery of PMS/Value Shortfall.

The subsidy payment is 66.73 percent of its six months revenue.

On a granular level, the net effect for the average Nigerian is that he or she is getting poorer, buffeted by rising inflationary pressures and worsening disposable income for each household in Africa’s most populous nation.

Read also: RipplesMetrics: From Afghanistan to Niger, here’s a breakdown of Nigeria’s donations to countries under Buhari

Nigeria’s poverty count (Nigerians who cannot afford N450 a day) has shot up from 85.2 million in 2020 to 90 million in 2021 and is now projected by the World Bank to rise further to 95.1 million this year, despite claims by the government that it is working to cut the number of Nigerians falling into the poverty pit.

Foreign direct investment for the whole year fell to the lowest on record at $698.78 million, according to data from the Central Bank of Nigeria, due to the perceived harsh business environment.