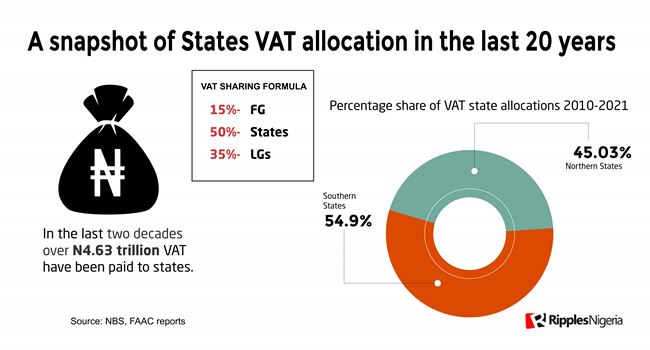 Over the last two decades, 36 states, including the federal capital, have shared about N4.63 trillion in value added tax revenue, with the northern states getting 45 percent of the total.

This is according to Ripples Nigeria analysis of National Bureau of Statistics published Federation Account Allocation Committee (FAAC) reports from 2010 to first quarter of 2021.

Lagos tops in the amount received by States, followed by Kano and Rivers State.

Interestingly Jigawa, Kaduna, Kastina, Bauchi and Jigawa, all ranked in the top 10 States with highest allocation during the period under review.

It is important to note that the data compiled from FAAC reports only reflect the gross VAT received by State governments and do not include the amount shared to the local governments within the States.

Also, the amounts received by States in 2016 for the months of May, August, September, October, and November is missing.

Another problem encountered when gathering the VAT shared to States was the lack of figures for the months of February, March, April, May, June, July, and August in 2014.

For clarity, in Nigeria, VAT is a consumption tax paid when goods are purchased and services rendered, and is governed by Value Added Tax Act Cap V1, LFN 2004 (as amended). VAT is a multi-stage tax borne by the final consumer.

All goods and services (produced within or imported into the country) are taxable except those specifically exempted by the VAT Act. Nigeria’s VAT is charged at a rate of 7.5 percent.

The Legal framework also provides that Value Added Tax revenue be shared thus: FG, 15 per cent; states, 50 per cent; and LGs, 35 per cent.

For this report only the 50 percent recieved by States was captured except for FCT.

Despite the limitations, data gathered over a 20-year period were able to provide an indication of how much VAT revenue was received by States only.

By ranking, Kano was only second to Lagos. This is despite a strong enforcement against alcohol, which is one of the major contributors of VAT revenue.

Read also: RipplesMetrics: Sokoto has the worst police-to-citizen ratio. Where does your State rank?

In reverse, Ekiti, Gombe, Taraba, Kwara, and Nassarawa got the lowest gross VAT allocation to States during the study period.

In the last eight years, a total of N304.3 billion was generated from breweries, bottling and beverages VAT.

This tax commonly referred to as alcohol tax was part of the total VAT allocation of N3.20 trillion received by States between 2013 to March 2021.

Within this period, 12 Nigerian States which have instituted Sharia law prohibiting the sale of alcohol received N926.4 billion in Value Added Tax.

As earlier stated, these figures do not include the amount shared to LGAs. Kano received the highest amount of N123.1 billion, followed by Kaduna with N92.09 billion.

The table gives a breakdown of what VAT received by States.

The compiled data from different FAAC reports also indicated that the Southern region received N2.23 trillion, which is 54.9 percent of the total amount of VAT shared throughout the 20-year period under consideration.

Northern states, on the hand, got N1.92 trillion of the VAT allocation to States which is about 45.08 percent of the total.

South-South states got N644.4 billion while with N455.7 billion, South East states got the lowest allocation.

N534.9 billion was shared by North-East states and North Central states’ VAT allocation in the last 20 years was N617.02 billion.

In the last one month, the issues on VAT has occupied the media space with different opinion on what is right or wrong with VAT tax collection.

While Gombe State government is begging southern states to shelve their plans to keep VAT generated in their states, Kogi government described the move as selfish.

This is coming after moves by Rivers and Lagos State, two of the biggest contributors to VAT revenue in the country, seek to keep VAT generated in their states.

This followed a judgment by justice Stephen Pam of the Federal High Court on August 10, 2021 that the plaintiff, Rivers State, and not the FIRS, should be collecting VAT and Personal Income Tax in the state.

Although a Court of Appeal sitting in Abuja on Friday ordered Rivers and Lagos State to stay action on the collection of VAT pending the determination of the appeal for a stay of execution filed before it by the FIRS, the interpretation of judgment will be made clearer in the coming days.

However, should Rivers and Lagos have their way in collecting VAT, a recent report by Punch, reveals the Federal Government, the Federal Capital Territory and about 34 will lose about N3.9 trillion.

The report noted that in the last five years alone, FIRS on behalf of all the states and the Federal Capital Territory collected N5.6 trillion VAT. Out of this sum, Lagos and Rivers State contributed about N3.9 trillion.

RipplesMetrics: Sokoto has the worst police-to-citizen ratio. Where does your State rank?