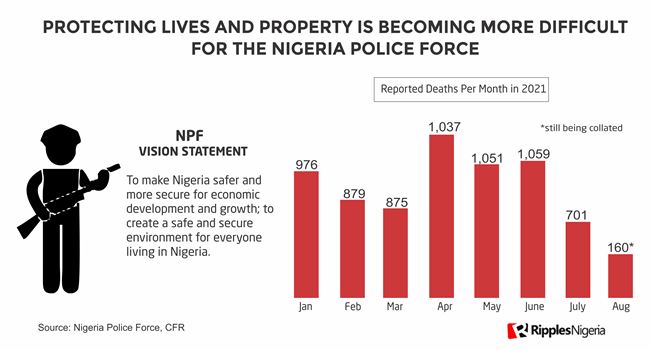 Without a doubt, Nigeria is in the grips of a security crisis. Almost every day, from East to North, South to West, a report of a missing or killed Nigerian is made public.

In fact, data from the Council on Foreign Relations reveals that since the start of the year (January to August), no fewer than six thousand four hundred (6,400) Nigerians have been reported killed in various attacks and incidents.

The index grouped Nigeria with war-torn nations such as Afghanistan, Yemen, Syria, South Sudan, Iraq, Somalia, Libya, and Pakistan, among others.

Despite the alarming statistics, it will surprise you to know that Nigeria has one of the world’s lowest police-to-citizen ratios far below the United Nations (UN) recommended ratio of 1 police officer to 450 persons.

Ripples Nigeria takes a deep dive to the most recent statistics from the Nigeria Police Force to understand which States are considered worst in terms of police protection per citizen.

Here is how the states rank in the most recent statistics from the Police Headquarters:

States with the highest police population

NPF data also showed that the number of police officers has been on the decline.

In 2016, female officers accounted for 19.09 per cent of the total police officers.

Analysis by cadre shows that in the three years under reference, the female gender had larger percentage in the rank and files cadre than in the senior police officer cadre.