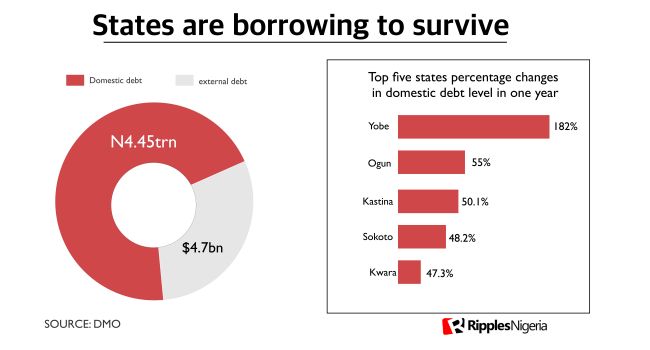 States are going through a difficult period. Forget the politics of attempting to get power, being at the helm of affairs is more difficult; that is, if people and progress are priorities.

Not only is the monthly Federation Allocation diminishing, oil money from the NNPC is also not flowing in. States are finding it increasingly difficult to attract investments, making more debts an increasing viable option for funds.

In a statement on Friday, Cross River State Government called the survival of the state as a miracle.

Similarly, Kwara State Government Ministry of Finance also revealed local government councils were forced to source for extra funds to pay full monthly salary to their workers in February and also March. This development means Nigeria’s debt stock at subnational level is about to get worst.

On Monday, the Debt Management Office (DMO) revealed that as at the end of 2021, thirty-three Nigerian states including the Federal Capital Territory owed N4.45 trillion domestic debt and $4.77 billion external debt.

This is an increase from N4.19 trillion domestic debt and N4.61 billion external debt, indicating that states in the 12 months of 2021 borrowed N268 billion from banks, and investors within Nigeria and $158.5 million from foreign creditors.

This is as only 11 states attracted investors money to their states data from the latest capital importation report shows.

In fact, among the states that attracted investment, Lagos alone accounted for 86.9% of the $6.7 billion.

The five states account for more than half(57.99%) of the total external debts.

RipplesMetrics: Despite promises, Nigeria in darkness, as govt pumps billions to power sector