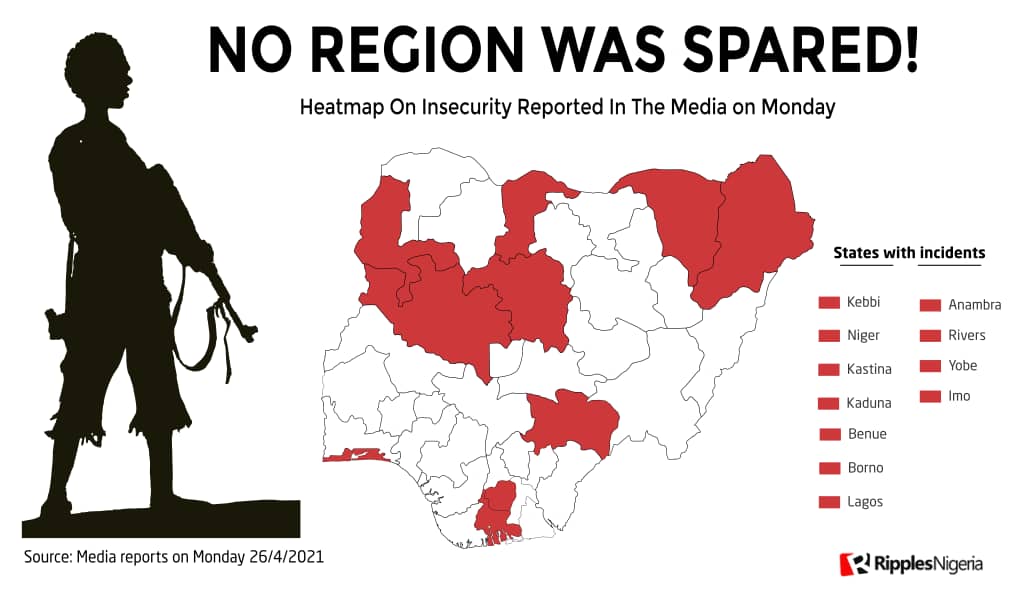 From north to east, south to west, the Nigerian media was inundated with events of kidnapping, killings, and ethnic clashes.

While some of the events occurred the previous day, the media recorded over 77 deaths which Ripples Nigeria chronicled.

In Yobe, about 2000 residents of Geidam were reportedly displaced after Boko Haram insurgents took hold of the town.

The insurgents who belong to the Islamic State in West Africa Province (ISWAP), a faction of Boko Haram, have occupied the town since Friday.

In Imo state, at Orieagu police station in Ehime Mbano, six officers were also reported to have been killed.

Ripples Nigeria had reported yesterday how a police officer told journalists at the scene that the gunmen who stormed the facility in large numbers opened fire on the cops who challenged them.

In Kebbi State, bandits were reported on Monday to have killed nine police officers including a divisional police officer, and two vigilante members. The event occurred in Sakaba Local Government Area of Kebbi State while security operatives were repelling an attack by bandits.

In Niger, although no lives were lost, Gov. Abubakar Bello had raised the alarm that Boko Haram elements had taken over Kaure axis in Shiroro Local Government Area of the state, a two-hour drive to Abuja.

The previous day, some bandits had invaded Kofar Kuyambana and kidnapped two housewives.

Gunmen suspected to be bandits had in the wee hours of Monday killed no fewer than six persons in three communities in Sabuwa Local Government Area of the State.

Borno state was the centre of attention for the media as 18 were reported to have lost their lives, 43 injured, and 50 missing after a military base in Mainok was attacked on Sunday.

In Anambra, at Igbariam campus of Chukwuemeka Odumegwu Ojukwu University nine persons and about 23 cows were killed by unknown gunmen.

And, in Rivers State, four soldiers were feared dead while two others sustained bullet injuries in Abua in Abua/Odual Local Government Area of Rivers State when unknown gunmen attacked a motorcade conveying oil workers to Omelema in the same local government area.

Explainer: From China to Brazil, all you need to know about Nigeria’s debts to countries