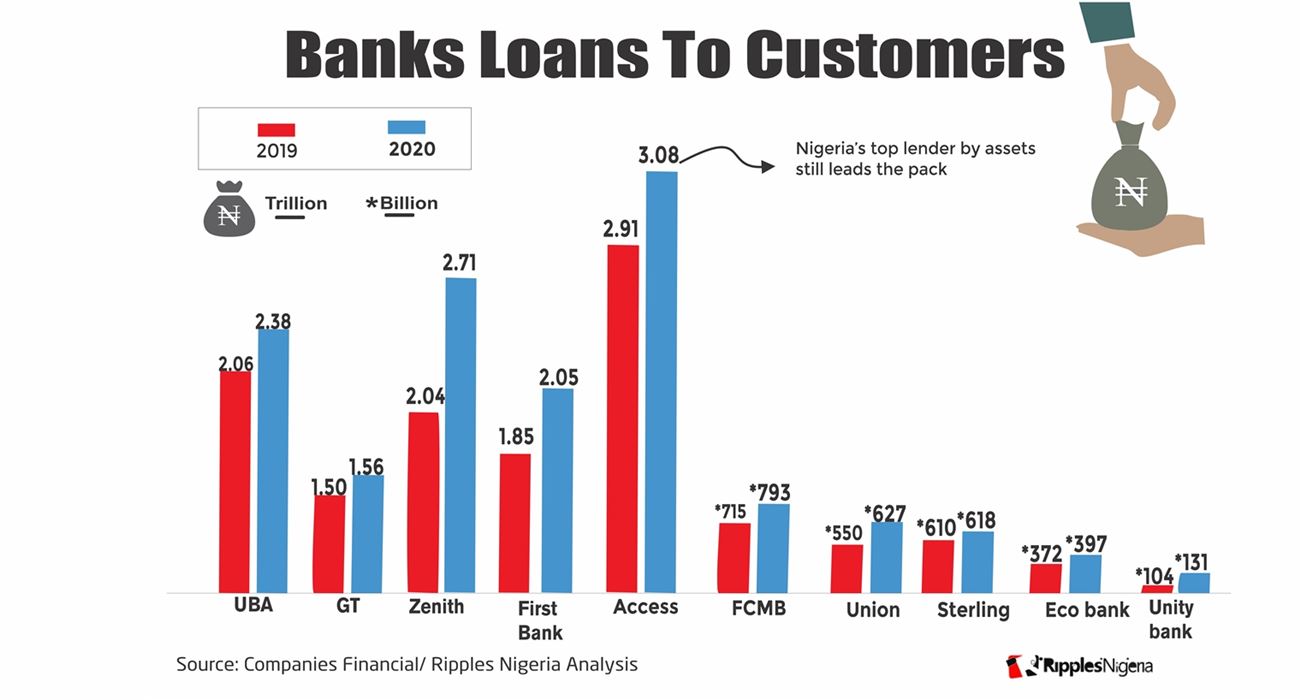 Ten Nigerian banks lend N14.36 trillion to retail and corporate customers in nine months 2020, with nine banks increasing their loans to both segment of customers, while one bank reduced its credit outflow during the same period.

Credit from banks to retail and corporate customers increased by N1.56 tillion within nine months last year when compared to the corresponding quarter of 2019, when the banking sector loaned out N12.79 trillion, according to ten financials checked by Ripples Nigeria.

The increase in credit offered by the financial institutions in 2020 surpassed the loans provided to retail and corporate customers a year before despite the outbreak of Coronavirus which caused lockdown of global economy and reduced private sector operations to skeletal model.

Companies considered non-essential were shutdown, while essential businesses were not operating to their optimal capacity. The temporary economic lockdown didn’t stop credit outflow from rising, with only one lender dropping its loan.

So why the increase in loans to customers amid falling revenue

Nigerian banks were also affected by COVID-19 pandemic, as they all had to operate below capacity during the outbreak and lockdown period which ended fully in October.

Banks closed their banking halls to customers, with many not having access. The impact on banks prompted a switch in operation, with lenders directing their customers to make use of their digital solutions for bank services.

Despite the interruption to Bank and other sectors’ financial flow, Central Bank of Nigeria (CBN) didn’t reduce its loan to deposit ratio of 65%, which has been a policy forcing banks to increase their loans to customers.

Bank’s that default or fail to meet the LDR risk losing more of their cash reserve to the CBN, as the financial regulator threatened that a levy of additional Cash Reserve Requirement of 50% of the lending shortfall from the target LDR – this will reduce the capital available for banks to conduct its business.

This is the motivating factor behind Nigerian banks increasing their gross credit during a period of downturn in Nigeria’s economy, declining revenue of private sector and increased Non-performing loan among the oil industry and other sectors.

Ripples Nigeria split the class of creditors among the deposit money banks (DMBs) into two: Trillion naira credit club and Billionaire credit club. This was determined by lenders’ credit level.

Findings by Ripples Nigeria showed that Access Bank gave out the highest credit for the period under review, approving N3,08 trillion in nine months 2020, surpassing the N2,91 trillion it loaned out during the same period in 2019.

Zenith Bank came next, offering its retail and corporate customers N2.71 trillion during 2020 nine months, improving on the N2.04 trillion the lender gave out as credit in the corresponding period of 2019.

UBA offered N2.38 trillion, which was the third largest loan out of the financial sector during the period under review, surpassing the N2.06 trillion loan issued in 2019 nine months.

First Bank made the trillion naira credit club as the lender gave out N2.05 trillion to its customers between January to September last year, increasing its loan to customers from the N1.85 trillion it reported as loan and advances for 2019 nine months.

GTBank completed the list of the trillion naira credit club, having approved N1.56 trillion for customers in nine months 2020, surpassing the N1.50 trillion obtained by customers during the same period in 2019.

According to Ripples Nigeria research, FCMB gave its customers N793.14 billion between first quarter and third quarter of 2020, an amount higher than the N715.88 billion it offered in the same period in 2019.

Union Bank also increased its loans to customers last year, according to its financials, with customers securing N627,37 billion within nine months of 2020, to rise above the N550.61 billion it approved in 2019 nine months.

Sterling Bank customers obtained N610.76 billion in nine months last year, offering less credit than the N618.73 billion the lender approved to its retail and corporate account holders in the corresponding period in 2019.

Ripples Nigeria gathered that Ecobank also increased its loans to customers, offering N397.37 billion to both retail and corporate customers. This is an improvement when compared to the N372.49 billion Ecobank customers obtained during the same period in 2019.

Unity Bank completed the list of the billion naira credit club, following N131.84 billion borrowed by their customers during the period under review. The amount obtained by customers is more than the N104.01 billion credit Unity Bamk approved in nine months of 2019.