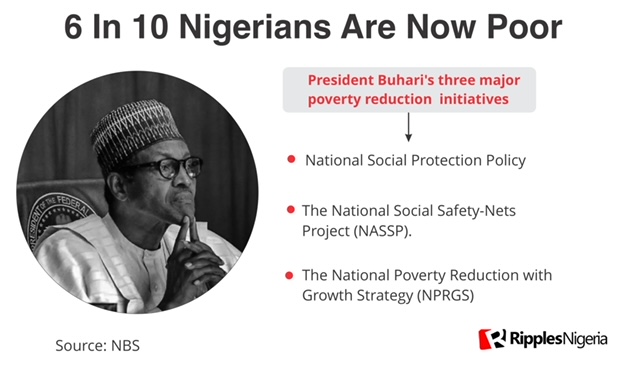 A National Bureau of Statistics (NBS) report has noted that the number of poor persons in Nigeria has increased to 133 million.

This is a massive increase from 82.9 million captured in the last poverty report. This implies a staggering 55 million increase between the periods of the two reports.

This development is coming after the Nigerian government had said that it lifted 10.5 million Nigerians out of poverty between 2019 and 2021.

Trends from the report

First, the National Social Protection Policy, which serves as the guidebook for addressing inequalities, highlights the social benefits accruable to each citizen, while the second was the establishment of the National Social Safety-Nets Project (NASSP).

In 2021, the government intensified its commitment to eradicating extreme poverty, and to accelerate a steady human capital growth, when the Federal Executive Council (FEC) approved the launch of the National Poverty Reduction with Growth Strategy (NPRGS)— a 10-year programme to accelerate the reduction in poverty
through economic growth, social protection programmes, and others.

Despite these efforts, the NBS 2022 poverty report provides deep insight that nothing has changed and the poverty map of Nigeria has, in fact, become larger.

According to the report, sixty-three percent of Nigeria’s population, which is 133 million, is multidimensionally poor.

Multidimensional Poverty Measure is an index that captures the percentage of households in a country deprived along three dimensions of well-being – monetary poverty, education, and basic infrastructure services.

The report stressed further that the multidimensionally poor Nigerians cook with dung, wood or charcoal, rather than cleaner energy. High deprivations are also apparent in sanitation time to healthcare.

Poverty according to the report is higher in rural areas, with 72% of persons described as poor, compared to 42% of people in urban areas.

The report added, “Approximately 70% of Nigeria’s population live in rural areas, yet these areas are home to 80% of poor people; the intensity of rura poverty is also higher: 42% in rural areas compared to 37% in urban areas.”

Breakdown of location of poor people in Nigeria shows that 86 million
live in the North, while 35%—nearly 47 million—live in the South.

By States, poverty figure is lowest in Ondo(27%) while Sokoto(91%) has the highest headcount rate.

The poorest States are listed as Sokoto, Bayelsa, Kebbi, Gombe and Yobe.

In total, 29% of all school-aged children are not attending school while 94% of all out of-school children are poor.

RipplesMetrics: Important numbers to note from the 2023 budget (Part 2)