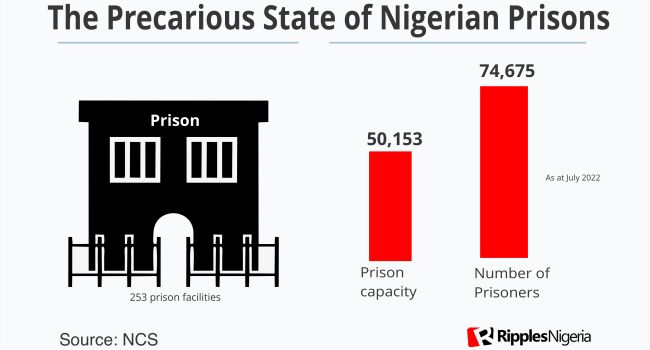 The incessant attacks on custodial facilities of the Nigerian Correctional Service (NCoS), to forcefully spring both convicts and awaiting trial inmates have become one danger too many.

On the 6th of July, exactly a month ago, Nigeria recorded its over 20th Jail break in seven years at Kuje prison, the Federal Capital Territory (FCT).

According to reports, over eight hundred prisoners (889) escaped, including members of the dreaded Boko Haram terrorists.

Although the Nigerian Correctional Service later announced that 559 prisoners remained in the prisons after the attack, 443 were recaptured, it also noted that 443 remained at large.

Breakdown of prison attacks over the years

Since 2015 to date, as aforementioned, Nigerian prison facilities across the country have come under attack 20 times.

The first jail break under the administration of President Muhammadu Buhari occurred on September 3, 2015 in Sokoto Remand Home break.

Since then, every year, newspapers have reported several jail breaks across the country.

In 2016, there were four prison breaks reported with the most prominent being the escape of two inmates on June 24, 2016 at the Kuje Medium Correctional Centre.

In 2017 and 2018 one prison break was reported respectively.

Similarly, in 2019 another prison break was reported on October 28, 2019 at Koton Karfe correctional centre, Kogi state.

About 122 inmates fled the Koton Karfe correctional center after a section of the facility was overrun by flood following a downpour in the town.

In 2020, newspapers reported the escape of jailed criminals in five different incidents.

The deadliest was in 2021 when seven prison-break incidents made the news.

The incident at Owerri facility, Imo State, where 1,844 inmates escaped after gunmen ambushed the centre shocked the country.

So far, in 2022, three Jail break incidents have been reported. While the recent Kuje Prison incident has sent shockwaves across the country, with schools around Abuja and Nasarawa States closing up over security threat, there have been two other incidents this year.

Another on May 13, 2022 at Agbor prison, Delta state after a heavy downpour resulted in the collapse of the northern perimeter wall of the prison, three inmates took to their heels and escaped the prison.

Over the years, several reasons have been adduced for the successful attacks on prison facilities.

These range from officers smuggling in contrabands, including phones, to inadequate security features such as CCTV, motion sensors, high wall made up of barbed wire and sometimes electric fencing of the wall.

Another is the abysmal congestion which according to latest data is at 74,675 prisoners out of which 71% are awaiting trial.

Without doubt, the Nigerian correctional system needs serious interventions that address the issues that bedevil it, from poor facilities to overcrowded prisons and its apparent lack of fortification against attacks.