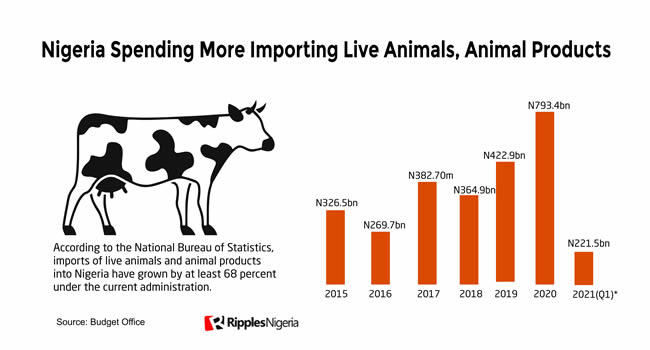 Despite the fact that pastoralism has lately become a big subject in the news, with reports of communal clashes and loss of lives, data show Nigeria’s spending on importing live animals has grown by 68.4 percent under the present administration.

This is according to data sourced from National Bureau of Statistics (NBS) foreign trade report data.

Ripples Nigeria analysis of NBS report revealed Nigeria has spent a total of N2.78 trillion between 2015 and 2021(Q1) on the importation of live animals and their products such as hides and skins, an increase from N1.65 trillion spent between 2008 and 2014 during the administrations of Musa Yar’Adua and Goodluck Jonathan.

In fact, at least over N200 billion was recorded to have been spent annually on importing live animals under the current administration, with the amount reaching N793.4 billion in 2020.

The most recent figures for the first quarter of 2021 showed N221.59 billion has already been spent.

“The increase in the amount spent on importing live animals underscores the need for Nigeria to address its pastoral issues; how can we be importing something we have a comparative advantage in, it puts a severe strain on our foreign exchange,” Jude Ohio, an agricultural economist, told Ripples Nigeria.

“As long as our currency continues to decline and we rely on imports to satisfy our agricultural requirements, this will continue to stress the economy. I think it is high time we start addressing lingering issues that are limiting productivity,” he added.

Also in a recent note, economic analysts at United Capital attributed the rise in import bills to global inflationary pressures and currency depreciation.

Ripples Nigeria had earlier reported that Nigeria was ranked by Statista to have an estimated 20.7 million cattle population, the 5th largest in the Africa.

The data company also projected cattle population will increase to 53.6 million by 2050.

The importation of Animal and vegetable fats and oils and other cleavage products also gulped N669.5 billion, up from N270.9 billion between 2008 and 2014.

Another is the prepared foodstuffs; beverages, spirits and vinegar; tobacco which rose to N4.65 trillion from N2.41 trillion in the corresponding period of the previous administration.

Related Topics:#featuredanimalBuhariNigeria’s importation
Up Next

RipplesMetrics: As economy bites, Nigerians withdrawing from pension savings up by 29.1%

RipplesMetrics: In Visuals, analysis of the domestic debt profile of Nigerian States