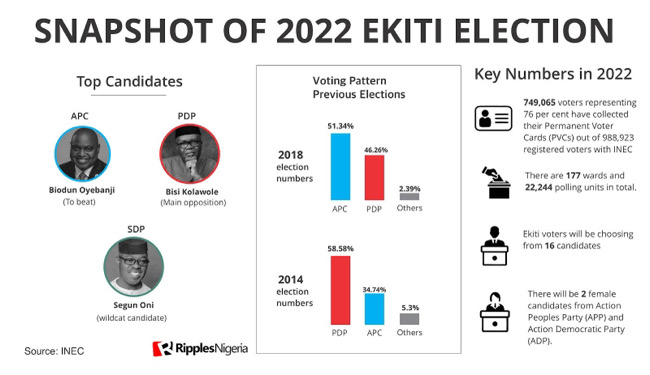 Today, June 18, 2022, about 734,746 registered voters will elect a new Governor to pilot the affairs of Ekiti State for the next four years.

This will be 7th time since 1999, and since the creation of the state in 1996, that an election would be held.

Ekiti State election schedule differs from other States due to a rerun election following the removal of Governor Segun Oni after 41 months by an appeal court in 2009.

In other words, Ekiti is in the off season election cycle because the Independent National Electoral Commission (INEC) was forced to conduct another election which brought in Dr Kayode Fayemi in 2010.

The third is General Tunji Olurin (Rtd) who was in office from 19 October, 2006 – 27 April, 2007. He was also of the Peoples Democratic Party (PDP), and came in after a state of emergency was declared.

Chief Tope Ademiluyi became Acting Governor between 27 April, 2007 and 29 May 2007 under the Peoples Democratic Party (PDP).

Rt. Hon. Tunji Odeyemi stepped in as acting Governor, the second in such capacity in less than two years. He piloted the affairs of the state from 17 February, 2009 – 6 May, 2009 as Peoples Democratic Party (PDP) candidate after Segun Oni’s election was cancelled.

Dr John Kayode Fayemi returned to win the next election to begin his second tenure from 15 July, 2018 and will be handing over in October 2022.

It is clear from the analysis above that Ekiti voters are difficult to predict.

With two acting governors, two reruns, and three different political parties, this year’s election is set to be very intriguing.

With Fayose completing his tenure, Fayemi had the chance to return to the state house.
He defeated Kolapo Olushola, the PDP candidate.

Numbers from this year’s election that matter

According to INEC there are a total of 988,923 registered voters in Ekiti state.

Out of this total, 734,746 persons have collected their Permanent Voters Card for the election.

INEC also announced that it will be deploying the Bimodal Voters Accreditation System (BVAS) for the Ekiti State Governorship Election.

Where the votes can be lost and won

There are 16 Local Government Areas in Ekiti State. At the last elections, the major battle by the two leading parties, APC and PDP, was fought in Ado.

Ikere and Ikole are also going to be critical for who becomes the next governor.

Breakdown of residents who voted in 2018 is stated below: