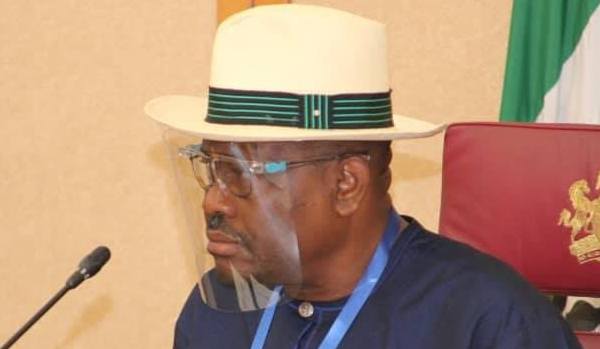 Governor Nyesom Wike has been called on by the Rivers State Commissioner of Police, Mr. Joseph Gobum Mukan, to hand over the former Acting Managing Director of Niger Delta Development Commission (NDDC), Dr. Joy Nunieh, who is currently taking refuge at the Government House in Port Harcourt.

This open call was made by the commissioner on ARISE TV, on Friday.

Recall that Wike had stormed the Port Harcourt residence of the former NDDC boss on Thursday and freed her from the siege policemen, there to arrest her.

However, before the police could gain entrance into her residence, Wike arrived with his team of security men and took her to the Government House, where she is currently taking refuge.

Nunieh, who has been engaged in a running battle with the Minister of Niger Delta, Godswill Akpabio, was billed to testify before the House of Representatives yesterday on the alleged monumental corruption in the NDDC.

Also speaking on the incidence, the state’s Police Public Relations Officer (PPRO) Nnamdi Omoni said that the policemen, who surrounded the residence of Nunieh were on legitimate duty.

The PPRO who did not state the mission of the policemen, debunked reports suggesting that the officers were on illegal duty.

Omoni said the police officers, who barricaded the house of Nunieh in Port Harcourt on Thursday, a day she was billed to testify before an ad-hoc committee of the House of Representatives investigating financial mismanagement in NDDC, came from the IGP Monitoring Unit, Abuja.

He said said the police officers observed due protocols and requisite standard operating procedures, including reporting at the police headquarters in Port Harcourt to have their Investigation Activities signed by the Commissioner, Joseph Mukan.

Omoni said: “The officers who were at the residence of the former Ag. MD Joi Nunieh were from the IGP Monitoring Team in Abuja and were here on official assignment.

“Before they proceeded to her residence, they observed due protocols and requisite standard operating procedures, including going through the processes of arriving themselves at the Headquarters with their Investigation Activities duly signed and approved by the Commissioner of Police, CP Joseph G Mukan.

“They went to her residence with Mobile Policemen, suggesting of course that they were there on official duty and not illegal duty as speculated. The reference indicating that the Officers were there without the directive of the CP nor the IGP is preposterous and most unfortunate., hence should be discountenanced and disregarded.

“The command under the watch of CP Joseph G. Mukan is poised to deliver quality policing services that will endure and stand the test of time. The Command will continue to remain firm, focused and will not be distracted by any consideration”, he stated.