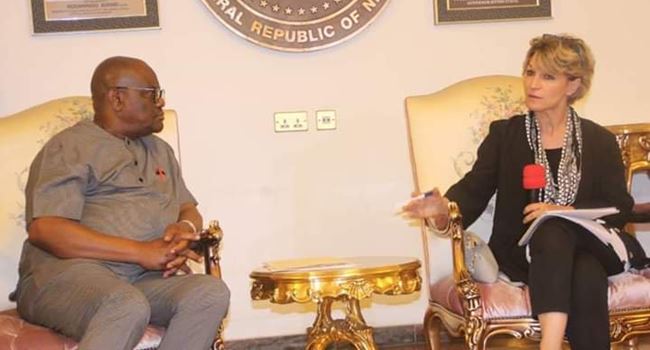 The governor of Rivers State, Nyesom Wike has called for the establishment of state police which he says will end the current security challenges being faced in the country.

Governor Wike made the call at the Government House in Port Harcourt on Wednesday when the United Nations Special Rapporteur on Human Rights , Ms. Callamard Agnes, paid him a visit.

According to him, the Nigerian political system is fashioned after the United States, which allows the federal, state and local governments to handle responsibilities independently.

He said; “We believe that there should be state police for us to effectively fight crime in the country. Our system is fashioned towards the United States which has federal, state and local police. Each of them has its responsibilities.

“In the present situation, if a crime is committed, the commissioner of police will first report to the Inspector General of Police, before taking any action”.

“We established the Neighbourhood Safety Corps Agency which would have helped the security agencies with Information. But it was politicised by the Federal Government when they sent the Nigerian Army to ensure that it did not come to fruition.”If the State Neighbourhood Safety Corps Agency was allowed, probably we would have solved part of the security problems,” he added.