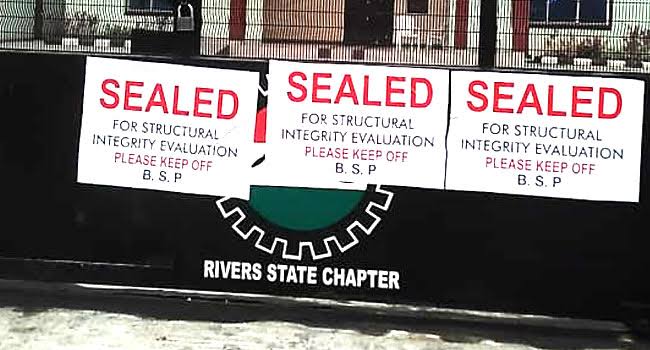 The Rivers State Government and the state chapter of the Nigeria Labour Congress (NLC) are locked in a war of words over the motive behind the sealing of the union’s secretariat in Port Harcourt.

The state government, in a statement on Monday by the Special Adviser, Special Projects and Head Bureau for Special Projects, George Kelly, described the claim by the state NLC that the building was sealed due to minimum wage issues as ungrateful and rebellious.

According to Kelly, those saying that the sealing was connected to the issue of minimum wage were trying to mislead the public against the genuine intentions of the government.

“The NLC structure, which was built pro bono by the Rivers State Government for labour, was completed and inaugurated only a few months ago by the Bureau and it is our normal practice to carry out general inspections and structural integrity evaluation or tests before the expiration of the defects liability period.

Read also: APC to Buhari: Oshiomhole determined to cause anarchy in Edo

“It is uncharitable and ungrateful for anyone under the aegis of the NLC to misconstrue this exercise for a product of an imagined imbroglio between labour and government. This is sad! The proponents of that outlandish news in our own thinking can best be described as uncharitable, ungrateful and rebellious,” Kelly said.

The Chairperson of the state chapter of the NLC, Mrs Beatrice Itubo, in her reaction, described the reason advanced by the state government as face-saving, adding that sealing of the labour house was based on the disagreement between the congress and government on the minimum wage.

Itubo said: “They said they sealed the place because of structural defect. They have handed over that place to us and if there is a defect, is it me who will inform them or they will inform me? How come they are coming now?

“Apart from that, if there is any defect, are they not supposed to give us a clear information? Will they just come in the night and seal the place and that we should not enter? It is because people are now shouting and complaining; that is why they are saying this. It is a face-saving device. The sealing of the place was based on minimum wage issue.

“For now, I am talking about the issues of workers. They (state government) should reconvene the minimum wage committee and do the things that we have demanded.”