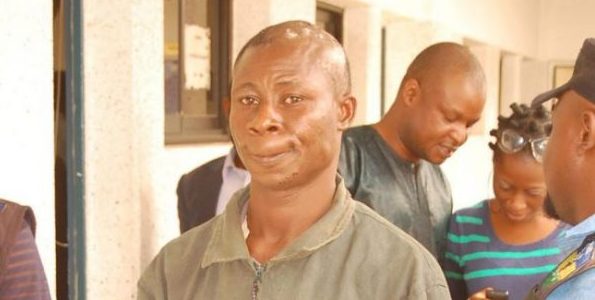 The police on Thursday paraded another armed robbery and kidnap kingpin, who participated in the New Year attack in Omoku, Rivers State.

The 32-year-old suspect, Desmond Okotubo, who was paraded at the Force Headquarters, Abuja, is a father of three, and hails from Egbenma in Unelga Local Government Area of Rivers State.

He told newsmen that, “the arrest and humiliation of the mother of Don Waney, coupled with the destruction of Waney’s mansions was the main reason for the New Year attack in Omoku.”

He also revealed, “that the plan to invade Omoku was hatched in Owerri, Imo State,” adding that Omoku vigilante group members were their original targets and not church worshippers.

He explained that they decided to vent their anger on the worshippers returning from cross over night when they could not track down the vigilante group members.

He said vigilante members were instrumental to the arrest of Don Waney’s mother and tracing of his mansions for destruction by government.

A member and leader of the group, Don Waney was recently killed by soldiers in far away Enugu State where he had run to take refuge.

The Federal Government had thereafter ordered the demolition of his mansion, even after the RIvers State government had initially said it had confiscated it.