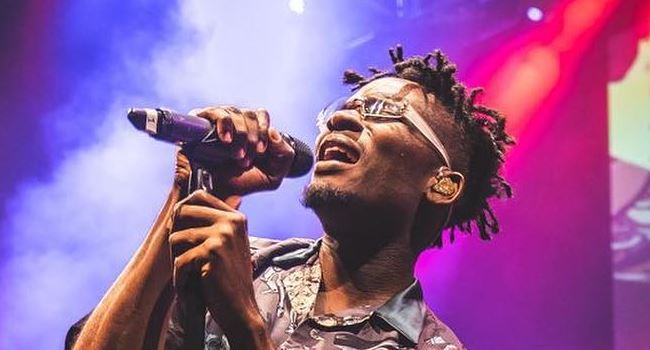 ‘Leg Over’ crooner, Tosin Ajibade aka Mr Eazi has been robbed in Ghana by unknown men following a visit after he flew into the West African country from neighbouring Seirra Leone.

The Nigerian singer took to his Twitter page on Wednesday morning to inform his 2.3 million followers on the social media platform that he lost his phone and laptop to the runaway thieves.

Mr Eazi also used the medium to appeal for help from Ghanaian celebrities to assist him recover his stolen items.

Mr Eazi wrote, “Abeg If Anybody see my laptop for Accra make e halla me! I go give am some cool £. Lmao but on a real anybody wey find am I promise I go do u well. If u open my laptop you go see this artwork for the place wey u for enter password. #FindMrEaziLaptop. Be like I go go tiptoe lane go beg the boys for there!! I sure sey dem be go listen me! Me sef I be hustler one time lol.”

READ ALSO: Mr Eazi’s father explains why he didn’t have a close relationship with his son

He also called on his colleagues in Ghana, Sarkodie, Shatta Wale and Stonebwoy, to use their influence in order to get his gadgets back.

The singer tweeted at Stoneboy saying, “Governor @stonebwoyb Abeg dem steal my laptop plus phones for Accra!! U go fit give executive order make street find am den return am! I am loyal to your government.”

Related Topics:GhanaMr Eazi
Up Next