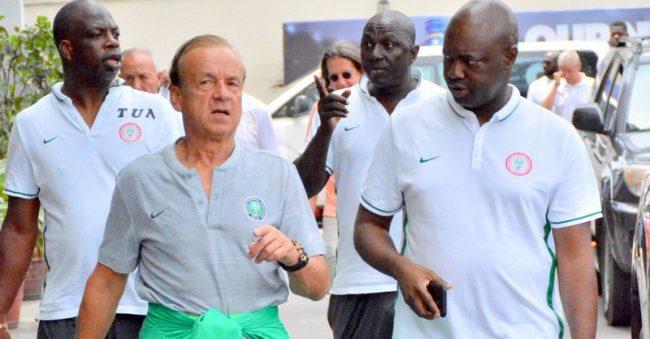 Super Eagles manager, Gernot Rohr is of the opinion that the Nigeria national team lack the readiness to compete for the FIFA World Cup title.

Since their debut in 1994, the Super Eagles of Nigeria have made a total of six appearances at the global mundial, but have only reached the second round on two occasions.

Rohr, who led the Eagles to their most-recent appearance in Russia in 2018, could not take the team past the group stage as they managed just one win in the phase.

The Franco-German coach was recently quoted by NewsCentral as saying that it would take a miracle for his team to compete favourably for the World Cup.

The coach cited the poor level of organization of games by the Nigeria Football Federation (NFF) and as well as the calibre of clubs the players ply their trades in.

“We are not ready to win the World Cup, for several reasons,” said Rohr

“First reason for me is the organisation. General organisation. Still a lot of problems for travelling, for preparation of the games specifically.

“Like here we will play in Lagos (Teslim Balogun Stadium, where the Eagles last played in 2011). Ten years no match of the Super Eagles, so we know that there’s no tradition here.”

“When you have so many of your players from your countries playing in the best clubs, so the probability that you also have one of the best teams in the world is very big.

“So what we have in Nigeria for example, we have our players in Fulham, in West Bromwich. It’s not Bayern Munich, Liverpool, Manchester United or Barcelona. But the other ones they have their players there.

“So it would be a miracle if we actually win the world cup,” Rohr concluded.

The Super Eagles failed to win any game in 2020 as they were held to a 4-4 draw in Portharcourt by Sierra Leone and a goalless draw away by the Leoneans in an AFCON qualifier doubleheader.

The Eagles will be playing against Benin Republic and Lesotho in March to wrap up the 2021 AFCON qualifying series.