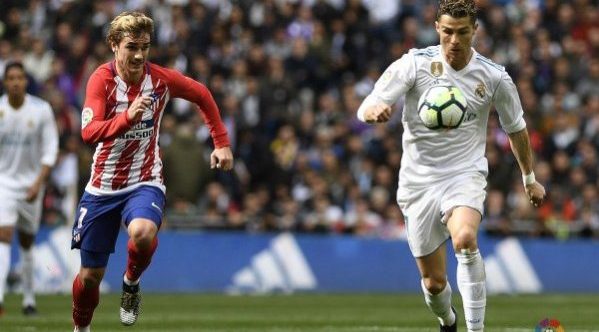 Real Madrid superstar, Cristiano Ronaldo and Atletico star forward, Antoine Griezmann were the scorers in the Madrid derby that ended 1-1 at the Bernabeu on Sunday.

Ronaldo’s goal meant he is scoring in a 10th straight game for Real, but his goal wasn’t enough for the home side as they were held by Griezmann’s effort.

Marco Asensio and Marcelo hit the woodwork at 0-0, before Ronaldo volleyed home Gareth Bale’s left-wing cross for his 20th goal in 10 club appearances.

Griezmann equalised on the rebound after Vitolo’s shot was saved by Keylor Navas just four minutes after Ronaldo’s 53th-minute opener.

The result keeps second-placed Atletico four points above Real – but 11 points behind leaders Barcelona, who beat Leganes 3-1 on Saturday.

Zinedine Zidane’s men will be playing at the Bernabeu again this week when they host Juventus in Wednesday’s Champions League quarter-final second leg.