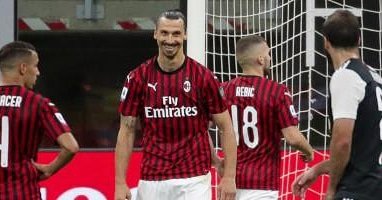 The title race in Italian Serie A retained status quo as the two top teams – Juventus and Lazio – suffered defeats on Tuesday night.

While Juventus were stunned 4-2 by AC Milan, Lazio lost 2-1 in the hands of Lecce earlier in the day, with both winners coming from behind to win.

Champions Juve squandered a two-goal lead as Milan came from behind to score four goals from the 62nd minute to the 80th minute.

Rabiot and Cristiano Ronaldo had put the visitors in the lead before Zlatan Ibrahimovic halved the deficit and Kessié, da Conceição Leão and Rebic scored to seal vitory.

At Lecce, Lazio ended the game with 10 men after Defender Patric was shown a straight red card for biting Giulio Donati on the arm in injury time.

The visitors had gone ahead through a fifth-minute opener, but struggling Leccee scored to level on 30 minutes.

The hosts completed the turnaround after half-time, as defender Fabio Lucioni headed in from a corner.