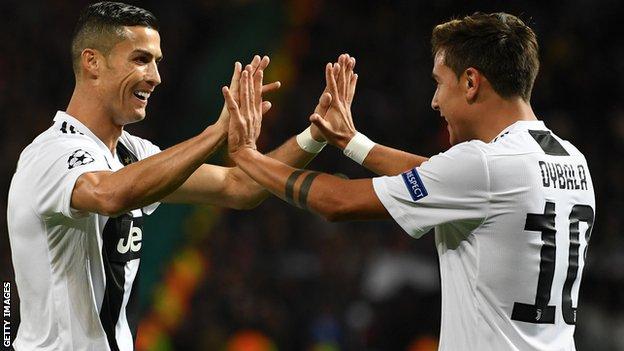 Cristiano Ronaldo marked his return to Old Trafford with a win as Juventus dominated and earned all three points in their Champions League clash on Tuesday night.

Paulo Dybala scored the only goal of the game in the 17th minute from a deflected cross originally from Ronaldo, as Juve moved five points clear at the top of Champions League Group H.

In the other game of the group, Valencia were held to a 1-1 draw by their hosts Young Boys in Switzerland earlier on Tuesday.

In Group F, Premier League champions Manchester City moved to the top of the standings as they thrashed their hosts Shakhtar Donetsk 3-0.

Goals by David Silva, Laporte and Bernardo Silva sealed a second win in the competition for the Pep Guardiola side.

The Russian side sank to the bottom of the table, as Hoffenheim and Olympique Lyon played a 3-3 draw in Germany to stay third and second respectively on the table.

Defending champions Real Madrid secured their first win in six games after a 2-1 win over Viktoria Plzen at the Bernabeu.

Goals by Marcelo and Karim Benzema were enough to give the Spanish giants all three points as a goal by Hrosovsky only pulled one back for the visitors.

Real stay top of the Group G with same points as AS Roma, who thrashed CSKA Moscow 3-0 in Italy.